The challenge of nature… again!

The building of the Second Crossing faced the same challenges as the original Severn Bridge: the same 14 metre tidal range, eight knot tidal flows, and exposure to 100 mph winds. However, this was a much longer crossing, giving greater concerns for the environment and the aggressive site conditions.

To meet these challenges, it would be necessary to minimise the impact of the tides, winds and weather during the four years of construction. This would be achieved by building as much as possible in large units, on land, before transporting the pieces out on to the estuary for assembly. This would require causeways, jack-up platforms, and large powered barges controlled by GPS (Global Positioning Systems). 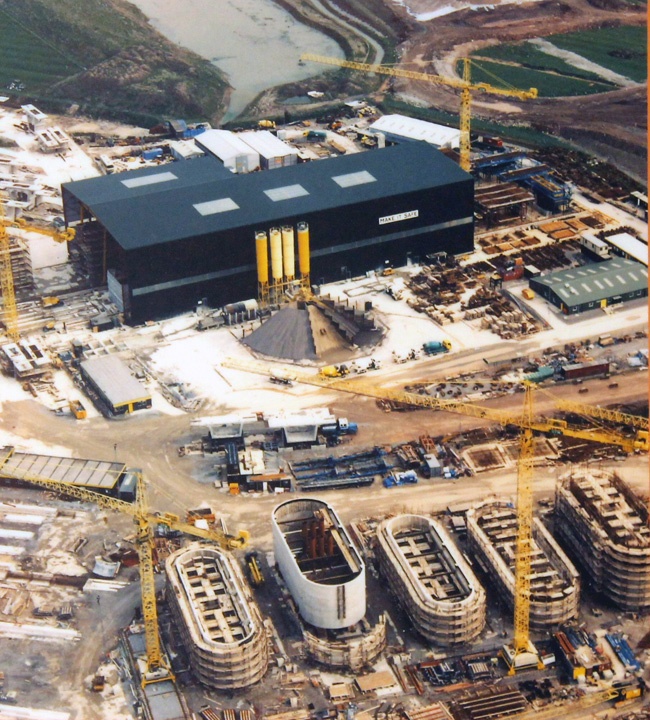 Aerial view of the construction yard adjacent to the Second Bridge

Large construction yards were required on each bank of the estuary and there was a great deal of detailed planning, bringing together onshore construction expertise and knowledge gained from the offshore oil and gas industry.

There was a worldwide hunt for marine and other equipment that would be needed. At the same time, a start was made on the design and manufacture of items such as precast moulds, barges and gantries that were specific to this particular project. The length of time available to work on the English Stones between tides would be limited, as would the time to float large units out to the bridge at high tides. These restrictions had to be factored in. Above all, strong teamwork would be required from the men and women involved to develop innovative solutions and then to turn them into reality.

All the foundations were built using pre-cast concrete caissons, which are very large boxes without tops or bottoms. Most caissons were seated directly on the rock of the English Stones but some were on piled foundations.

To avoid any additional loading on the Severn Railway Tunnel, the lengths of all viaduct spans were adjusted to ensure that a longer standard length of span would be available at the point where the viaduct would cross over the railway tunnel. Also bored piles were used to support the caissons on either side of the tunnel because no change in the loading condition on the tunnel could be tolerated. Monitoring devices were fitted to the tunnel lining to check for any movement in the structure of the tunnel. Where movement did occur, it was found to be related to the very different loads imposed by high and low tide, rather than by the new crossing.

The Pier units were pre-cast. They were then transported from the yard and assembled on top of the caissons, ready to support the viaduct. These units were 3.5 metres long and weighed up to 200 tonnes. Approximately 2400 units were required. 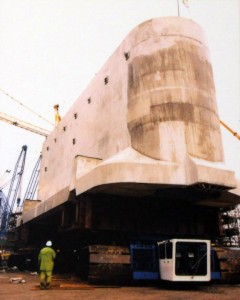 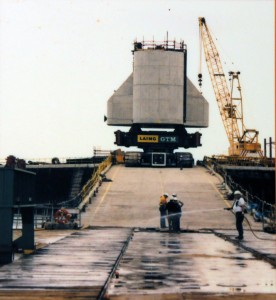 Caisson on tractor about to move down on to waiting barge 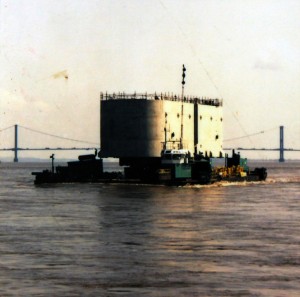 Caisson on board barge 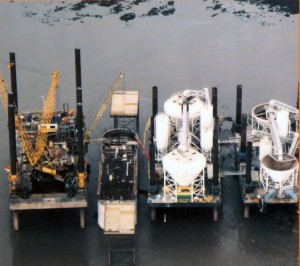 The concrete batching plant for the Caissons, etc was kept close to the action 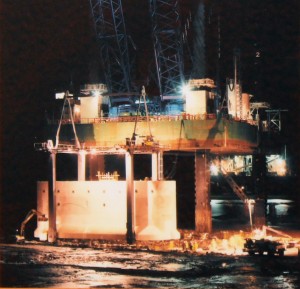 Caisson being lowered onto prepared bedrock under floodlights 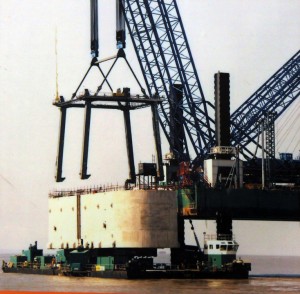 Preparing to lift caisson off barge

The precast concrete deck units were “match cast” in the yards. Each unit was cast against its neighbour to ensure that it would fit correctly when it was assembled in the estuary. Adjustments were made to the mould so that the correct curve of the viaduct could be created. This achieved a combination of factory production with repeated modular construction. The viaducts were built progressively from each shore using a purpose built launching gantry that was supported on units already placed. Units were delivered along the completed part of the viaduct and picked up from there by the gantry. 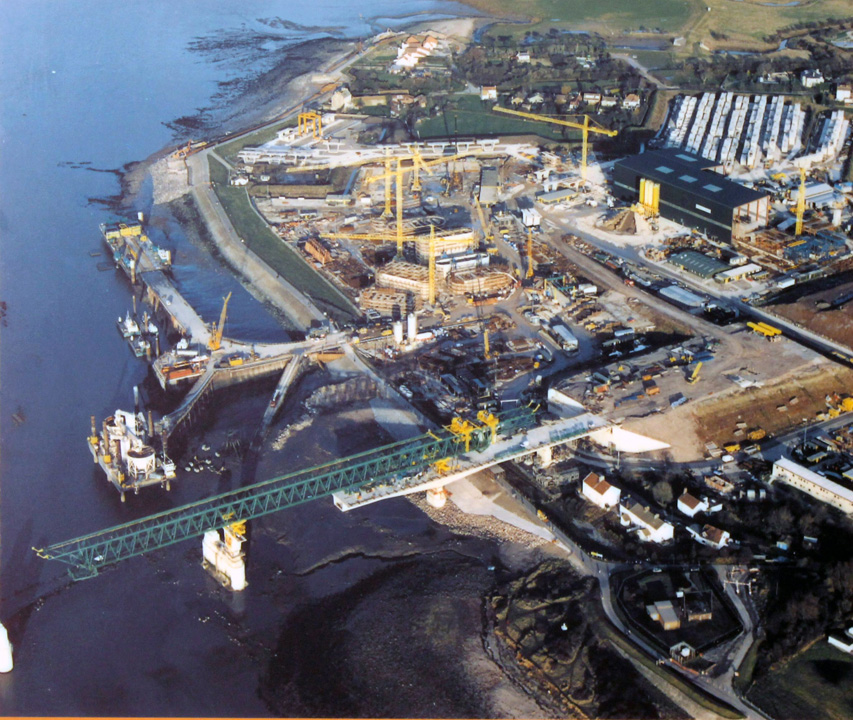 Another view of the yard, with the mobile launching gantry at the eastern end of the viaduct, having already placed viaduct units either side of the first pier. 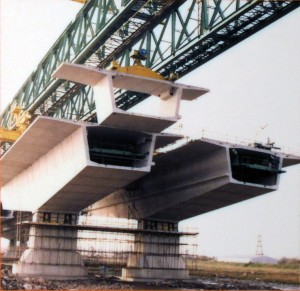 The gantry is bringing the next viaduct unit to its intended location, adjacent to the unit against which it had been match-cast in the construction yard 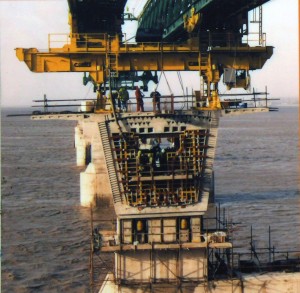 Building started by placing a deck unit on the first pier and holding it in place with temporary steel ties. Successive units were then added, one at a time, first to one side, then the other, to keep the two sides in balance. These additional units are held in place by steel strands positioned within the units that are tensioned horizontally. This provided a “balanced cantilever” form of construction.

Units were added until they reached half way to the next pier. The gantry was then moved forward over the completed work, so that it could be supported by the next pier. This sequence was repeated and the gaps behind were closed. Further longitudinal pre-stressing was then incorporated into the units to create a continuous structure.

The gantry has been moved forward to start building the viaduct out in both directions from the new pier, keeping the new section in balance over the pier 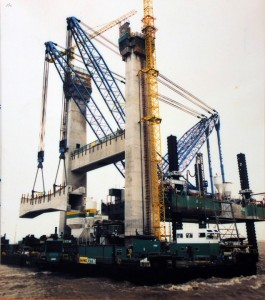 A pylon is under construction, with the lower cross beam already in place 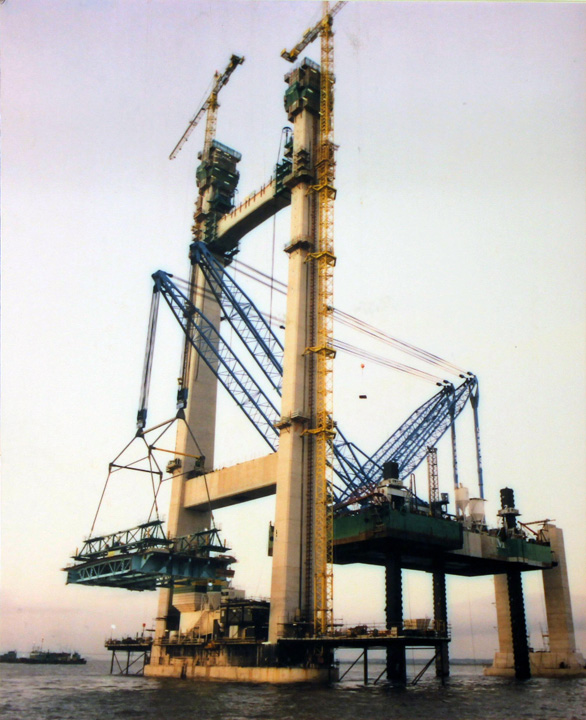 The first section of bridge deck is being lifted into place, on top of the lower cross beam 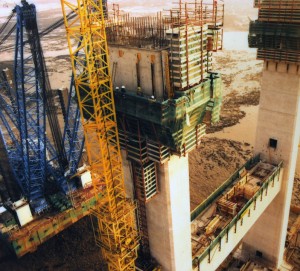 The foundations for the two large pylons of the cable stayed bridge were built by using caissons in exactly the same way as for the viaduct. These two caissons were both in excess of 2000 tons and were among the first to be placed, in the Spring of 1993.

The pylons were the most significant parts of the crossing for which the general policy of precasting on land, proved unfavourable. They were therefore constructed of reinforced concrete, in situ. The reinforcement cages were prefabricated on land, transported out to the pylon locations, and lifted into place. The concrete was made in a batching plant located on the caisson. It was placed using one of two cranes and then, when the concrete was strong enough, an ingenious “self climbing” formwork moved up the pylon. Precast cross beams were lifted into place as the pylons were being built.

The pylons are approximately 150 metres high, which is equivalent to a 50 storey block of flats. They have warning lights for aircraft at the top and they are hollow and have lifts, inside, to provide access for maintenance.
For more on Building the Shoots Bridge Pylons, Click Here 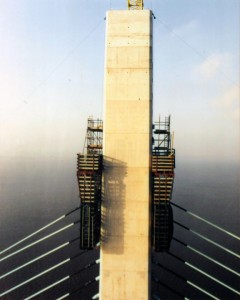 A side view of the top of a pylon. A pair of cables, one from each pylon, will support the most distant end of an individual deck unit

The long span of the main bridge required lighter deck units, which were made of steel lattice girders. A concrete slab on top carries both the traffic loads and the large compression force introduced by the cable stays. The style of support gives the cable-stayed form of construction its name. It is a key difference from suspension bridge construction, seen upstream on the Severn Bridge, where the deck is hung from the main suspension cables.

Like the viaduct, the deck construction started directly over the pier and units were placed alternately on each side. The units were lifted off the barge by cranes located at the ends of the deck and were tied back to the pylon with inclined steel support cables to take the load. This required simultaneous work both at deck level and high up on the pylons. 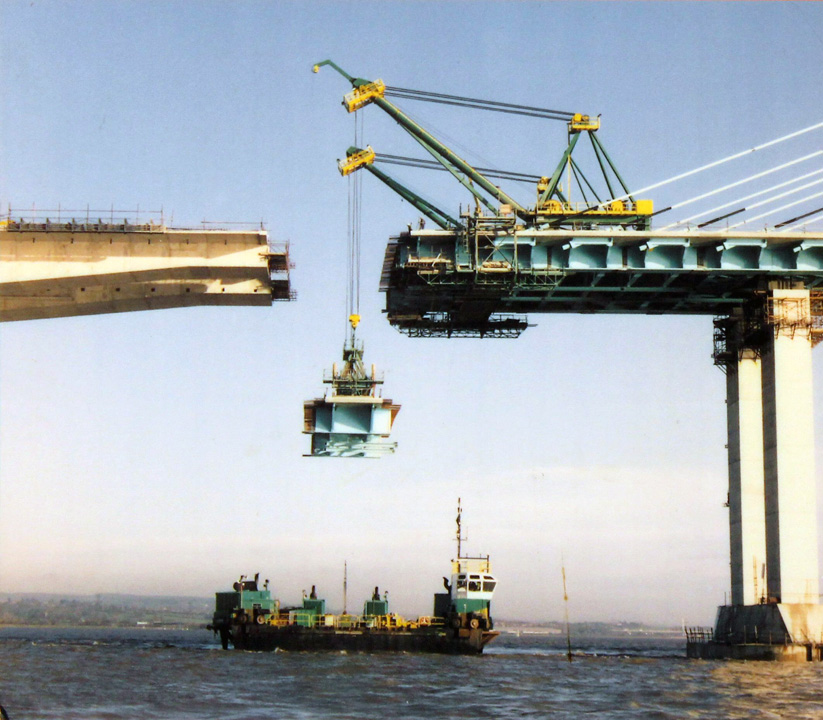 The final deck unit, that will close the gap between the bridge deck and the viaduct, is being lifted from the barge into its final resting place 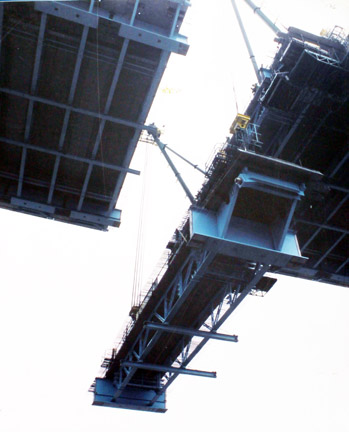 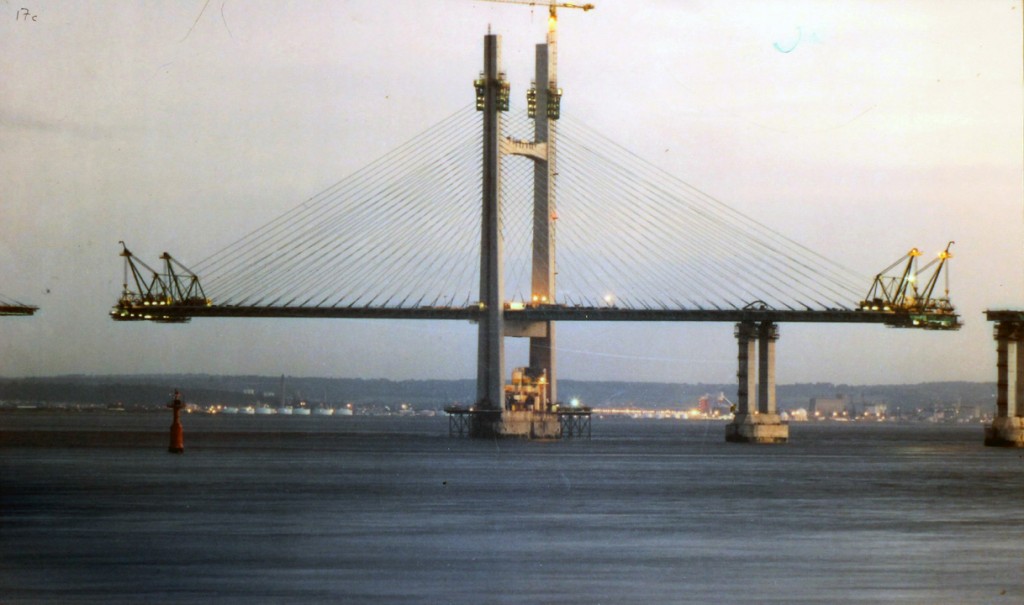 The overall sequence for placing the deck units took from September 1994 until 12th of November 1995 when the middle section was lifted into place, with 6 mm to spare on each side.

Watch the 12 Minute Video of the Construction Process