Throughout recorded history, until well into the Industrial Revolution, the most efficient method of transporting heavy goods was by river and coastal water. It is, therefore, not surprising that the majority of large urban settlements in all parts of the world are located in close proximity to an effective waterway.

The River Severn is the longest river in Britain. It played a crucial role in the economic development of the post-medieval nation. Prior to the development of canals, it carried a greater volume of traffic than any other waterway in Europe. Rising on the slopes of Plynlimon Fawr, it meanders through central Wales as far as Shrewsbury and then turns south, passing under the famous Iron Bridge at Coalbrookdale and several bridges designed by Thomas Telford. His bridge at Over, just downstream of Gloucester, was opened in 1830 and remained the lowest road crossing of the estuary until the M4 motorway was opened in 1966.

The golden age of water-borne transport came immediately before the coming of the railways, when all possible use was made of this mode. By 1800, small river craft were able to navigate up the river as far as Shrewsbury; while Bewdley was considered to be the upper reach for larger vessels. With the construction of new waterways such as the Staffordshire and Worcestershire Canal which gave access to the Black Country, the Severn played an even more important role in the economy of the region. Access up as far as Gloucester, was improved by the opening of the Gloucester to Sharpness Canal in 1827, after a tortuous gestation.

During the late 18th century, most roads in this country were in such a poor state that manufacturers often had to go to very great lengths to transport their goods. An example of this was the route chosen, in 1775, by a company from Wellington in Shropshire to deliver a consignment of pig iron to Chester, 60 miles (97 km) further north as the crow flies. The journey began with the iron being transported by cart to the Severn, to be loaded on to Bristol-bound riverboats. On arrival in Bristol, the material was transhipped to sea-going vessels and then taken right around the coast of Wales, into the mouth of the Dee, and so to Chester. This example, involving a journey of over 400 miles (644 km) by water with two trans-shipments, speaks eloquently about the state of the roads at that time.

Crossing the river has always been hampered by the high tides and fast currents, causing a real problem for all the peoples who have inhabited its boundaries. An ancient crossing route has been identified from the end of an ancient ridge-way over the Cotswolds to Shepperdine on the English side and onto the Beachley peninsula on the Welsh side. After the retreat of the ice, this route would have been used by the first settlers, their primitive rafts taking advantage of the tidal flows to go E-W on the ebb and W-E on the flow. This crossing probably survived through the Roman period and into mediaeval times, as indicated by the location of the southern end of Offa’s Dyke, part way down the Beachley Peninsula.

No record survives of the efforts made in early times to provide a regular ferry service but there is archaeological evidence indicating shipping trade across the Estuary. The first record of a regular ferry is from AD 1131. It was used by monks at Tintern Abbey, under a grant from Winebold de Balon who owned the land. The ferry plied across at the narrow point between Aust to Beachley. This ferry route was maintained down the following centuries and is known as the Old Passage. 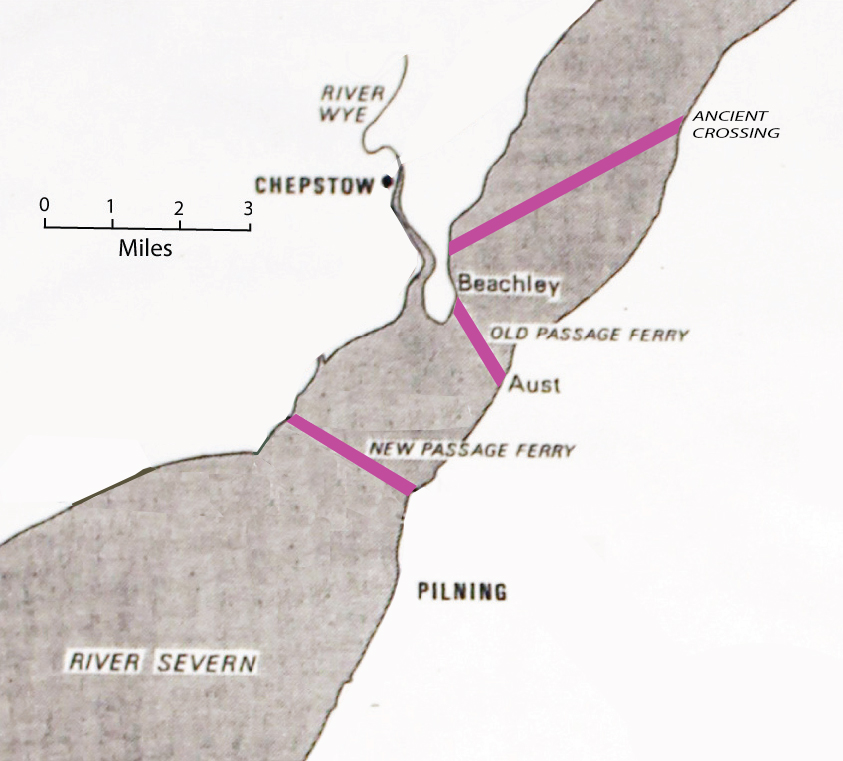 The alternative ferry route, across the English Stones, might, in fact, be the older of the two. However, it was closed by Cromwell, following the drowning of Parliamentary troops marooned on the English Stones in 1645. After it reopened in 1718, it became known as the “New Passage”.

The early ferries were not for the faint hearted. Daniel Defoe described the Old Passage crossing from Aust to Beachley as an “ugly, dangerous and very inconvenient ferry over the Severn”. Travelling to Wales in 1725, he decided that the alternative route via Gloucester was the safest and surest way, taking account of the weather and seeing the sorry state of the ferry boats at Aust;

“The sea was so broad, the fame of the Bore of the tide so formidable, the wind also made the water so rough, and which was worse, the boats to carry over both man and horse appeared so very mean, that, in short, none of us cared to venture. So we came back, and resolved to keep on the road to Gloucester”.

The Contribution of Thomas Telford

The route from the west bank of the Severn, opposite Bristol, through South Wales was in a poor state of repair throughout the eighteenth century and frequent calls were made for its improvement. Reductions in journey times became of pressing importance in the 18th century, as markets increased in scale and reach with the establishment of Empire and the impact of the Industrial Revolution. By the early 1800s steam pickets were plying between West Wales and Southern Ireland. In 1823, the Post Master General sought to improve the Mail Coach route between London and Milford Haven and he called upon Thomas Telford to advise on what should be done.

The advantage of replacing the long diversion around Gloucester whenever the ferry services were interrupted was evident to Telford and he believed that the value of the reduced journey times would justify the building of a permanent crossing. In modern times, major estuarial crossings have far outstripped other public works in economic gain, providing returns in the region of 200% in the first year alone.

Telford’s opinion of the New Passage crossing near the English Stones was unequivocal; “One of the most forbidding places at which an important ferry was ever established, a succession of violent cataracts formed in a rocky channel exposed to the rapid rush of a tide which has scarcely an equal on any other coast“.

Telford’s first proposal was a crossing from Uphill Bay in Somerset to Sully Island on the west side of Cardiff (this is similar to the line of the proposed Severn Barrage). It is possible to imagine Telford staring across the swirling waters in awe and excitement at the prospect of engineering such a structure and the wealth it would generate for the area. However, the proposal was rejected.

Telford then considered the Old Passage which crossed at the narrowest point on the estuary. At that time, his two suspension bridges were in the course of construction in North Wales, so it came as no surprise when, in 1824, he suggested a similar solution for the Severn at the Old Passage. However, his suggestion was not taken forward because, at that time, the route to Dublin via Holyhead carried more political clout than the South Wales route to southern Ireland. Nevertheless, on 26 November 1825, plans were announced for improvements to the Old Passage, including a new ferry and improved landing facilities on both sides of the estuary.

A short diversion — The Old Wye Bridge at Chepstow

Before moving on, the reader might be interested to learn about the existence of an old and historically-important road bridge situated less than 3 miles (5 km) from the western end of the Severn Bridge.

To the historically minded, the name of Chepstow conjures up visions of the medieval castle and Brunel’s magnificent Railway Bridge.  However, just upstream from the new Wye Crossing at Chepstow, there is a very interesting Grade One listed, five span, cast iron bridge which passed its 200th Anniversary in 2016.  Carrying the main road from Gloucester to South Wales, it was built to replace an older, wood and stone, bridge that had been struggling to cope with the prevailing conditions on the River Wye.

The tidal range at the Chepstow Bridge is only marginally less than that at the nearby Severn Bridge which, at 40 ft (14 m), is the second highest in the world.  This means that, for long periods every day, the view of the bridge on the water is constantly changing as water rushes up and down.  The bridge has five spans so there are four piers in the river that navigators need to avoid.

In 1811, in response to a request for bids to replace the old bridge, Watkin George of Cyfarthfa, Merthyr Tydfil, and John Rennie had each prepared designs for new cast iron spans on the existing piers and Rennie also prepared a design for a 250 ft (76.2m) span cast iron arch flanked with 72 ft (22m) span masonry arches.  These bids were all rejected, mainly on grounds of cost. 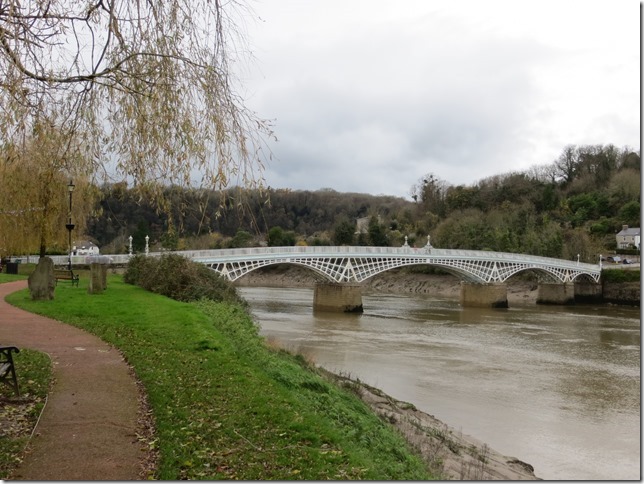 The Old Chepstow Bridge – The Chepstow Museum holds various prints of older bridges that had spanned the river at this point.

In 1812, a collision occurred between a vessel and one of the piers, causing 6 deaths and significant damage to the bridge.  This proved to be the catalyst for action.  The foundation stone for a new bridge, at the same location, was laid in 1813.  The following year, a contract to design and construct the new bridge was let to John Urpeth Rastick, Robert Hazledine, Thomas Davies and Alexander Brodie of Bridgenorth Ironworks.  Rastick was responsible for the design of the bridge and he supervised its construction.  Some of the ironwork was cast at Calcutts Ironworks in Shropshire, which was owned at the time by Brodie, and later by Hazledine.

The central span of the bridge is 112 ft (37 m) long and it is flanked by two 70 ft (21.6 m ) spans and then two end spans of 34 feet (10.5 m).  The overall length is about 487 ft (149.4 m) and it is 20 feet (6.1 m) wide. The piers and the abutments from the previous bridge were reused after being strengthened by a surrounding cover of large rectangular stone blocks (ashlar).  The deck for each of the graduated spans is supported by five, shallow lattice, cast iron arches (four of the outer lattice arches are visible on the photograph, opposite) and these elements, together with the vertically curved road profile and the decorative lamp standards, all contribute to the bridge’s attractive appearance. 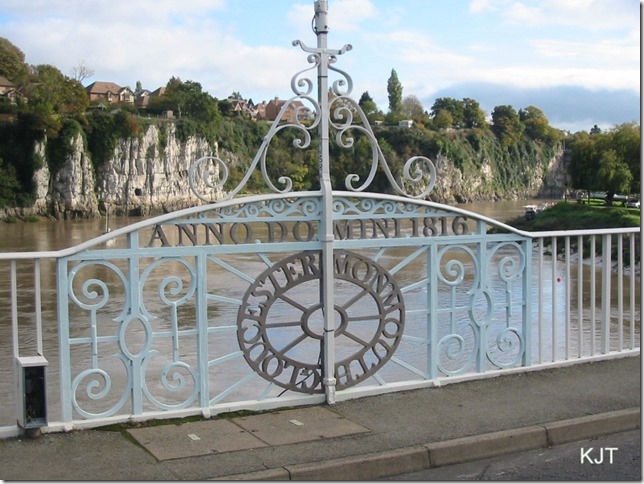 Decoration at the centre of the old Chepstow bridge

The bridge was opened on 24th July 1816.  The original contract price was £17,150, and the total scheme cost, including fees, was £22,116.  This was less than half of Rennie’s earlier bid.  The centre span was strengthened by the addition of steel ribs in 1889 and further extensive repairs and reinforcement were carried out in 1979-80.

When built, the new structure became the third largest cast iron bridge in the world.  It is now the largest surviving bridge of its type and era. The bridge carried the only trunk road into South Wales until 1988, when the Chepstow Inner bypass was opened.  It continues to carry local traffic across the river.

The design is generally considered to having been inspired by the work of Thomas Telford who built several cast iron arch bridges that can still be seen in Mid and North Wales.  It therefore provides an opportunity for visitors to the area to see what Thomas Telford would probably have provided, had he been called upon to do so.

Rastick [1780-1856] is better known as a railway engineer and locomotive builder. He helped Richard Trevithick develop his ideas for steam engines and built a locomotive for him in 1808.  In 1829 he built the first steam locomotive to run in the USA.  In 1829, he chaired the judging panel at the Rainhill Trials for the Liverpool and Manchester Railway which led to the approval of Stephenson’s “Rocket” and he built many railways in Britain, including the London & Brighton Railway.