The towers supporting the main cables were originally constructed as hollow steel boxes, cantilevered from the foundation. They carry both the vertical load from the weight of the structure and the bending moments that arise from different distributions of live loading. As a single heavy vehicle moves on to the bridge, the main cable will sag a small fraction towards the nearer tower (like a garment on the clothes-line), accompanied by similar reactions from all the other vehicles on the bridge at that time. The top of the tower will be pulled backwards and forwards, depending upon the aggregate of all the individual reactions, and it must be capable of resisting the impact of the worst case scenario, including any co-existing transverse wind loading.

Single plates of mild steel had been used in the construction of the tower walls, each being stiffened, off-site, by the addition of vertical stiffeners on what would become the interior face of the tower wall. 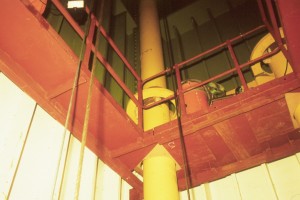 Column and guide inside tower leg.

To relieve the box walls of some of their vertical stress, four tubular steel columns were installed in each tower leg and then jacked up, simultaneously. These columns are about 120 metres high and 400 mm diameter with a wall thickness of 30 mm. Each column has 19 sections, which were threaded, one by one, through a small access door at walkway level. 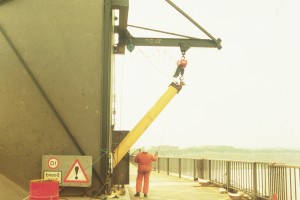 The door could not be enlarged because of the high stresses in the tower walls. A grillage of steel beams and columns at the inside at the top of the tower legs transfers the jacking load from the columns to the underside of the main cable as it passes over the tower. 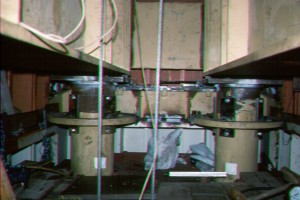 Top of columns under grillage, inside cable saddle.

The columns were jacked upwards from the bottom with a total force of 2000 tonnes per tower leg. Special sliding bearings locate the columns at nineteen positions within the tower to prevent buckling. The jacking lifted the bottoms of the columns by 100mm. The columns shortened in compression by about 75mm and the saddles that carry the main cables over the tops of the towers were raised by some 25mm. The Severn Bridge is an inch taller than it was before the strengthening!

B. Middle Portal Connections
The connections between the horizontal portal beams and the vertical tower legs were strengthened, both internally and externally to cope with the transverse wind loading.

C. Tower Saddle
The main cables pass over the top of each tower leg in a saddle. During construction, the individual strands of the main cable were laid in this saddle as the spinning continued. As the main cables carry the whole weight of the bridge deck and the traffic, the stresses in the saddle are very considerable, especially the splitting effect that tends to separate the two sides. The saddles were upgraded with C-clamps – similar in principle to a G-clamp used in carpentry – to help resist the splitting force.

New access platforms were also installed at the tops of the towers to assist with inspection and maintenance.

D&E. Cables
New hand-strand ropes and posts were provided above the main cables. As well as providing access, these support new maintenance cradles for inspecting and painting the main cable. The main cable itself did not need strengthening but the bolts in the cable clamps, at the tops of the hangers, were renewed and re-tensioned. 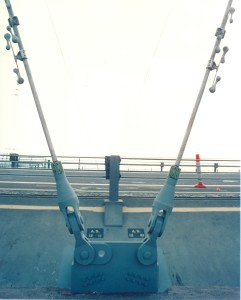 F. Hangers
All 376 hangers were replaced, one by one, at night while traffic was restricted to one lane in each direction. The new hangers are slightly thicker that the originals and the design of the end sockets is improved to reduce the risks of kinking and corrosion

The original hangers were terminated in metal sockets filled with white metal. However, there was no hole in the socket for drainage which led to some speculative concern about the condition of some of the wires making up the hanger. In addition, just before the Royal Opening a “man with a file” was sent around to tidy up the white metal protruding from the tops of the sockets. Unfortunately he also broke through the anti-corrosion coating in several places and a number of the outside peripheral wires failed. This posed the question about the condition of the inner wires. Ultimately all the hangers were replaced, although mainly for reasons concerned with the bridge loading.

G, J & K. Steel Box Deck
The top of the steel box girder deck, over which the traffic drives, is 12mm plate stiffened by steel troughs welded to the underside. Repeated loads from the wheels of heavy goods vehicles had tended to cause local weld damage and it was decided to grind out and replace the welds immediately under the lane wheel tracks. The original fillet welds were replaced with a partial penetration weld requiring three passes. Changing just this one weld detail required 48 miles of welding (3 passes/weld, 2 welds/wheel track, 2 wheel tracks/carriageway, 2 carriageways, length of crossing 2 miles).

New under-deck travelling maintenance gantries were provided for inspection and painting. Also, new manholes were installed in the deck boxes to assist access for the strengthening work and for future inspection and maintenance. When the bridge was originally built, it was intended that the box girder deck would be sealed and kept dry with silica gel. For this reason the original access manholes were very small. Hence it is rumoured that a one-time Chief Highway Engineer of generous proportions was unable to visit the inside of the bridge deck.
Prior to strengthening, there was only a thin layer of asphalt surfacing on the steel deck units. A thicker layer was desirable but had to be rejected because of the effect of the extra weight on the cables.

It was discovered at an early stage that the two rocker bearings at each of the towers had been designed to carry half the maximum reaction from a fully loaded deck. However, when the deck was eccentrically loaded, one of the rockers went into tension and the other carried a greater load than it had been designed for. All were replaced.
New buffers were provided to transfer longitudinal force if deck movement becomes excessive.

I. New Air and Water Mains
To help with future maintenance, a compressed air main and a water main were installed over the full length of the crossing. The water main was to be used to fight any substantial fire on the bridge, although subsequently it has been decommissioned.

Other Work on Severn Bridge
Movements of the deck due to thermal expansion and loading are catered for by “Demag” expansion joints in the carriageway at each tower. Increases in the required longitudinal expansion and contraction temperature allowances had to be catered for. Also it had not been recognised that the joint would need to cope with extreme racking movements due to the side sway of the main span from increased high wind design speeds. For these reasons, the joints had to be modified significantly.

It was also discovered that the large chambers in the concrete anchorages, where the individual strands of the main cable were splayed out and anchored separately, had a damp atmosphere and that the wires were beginning to show early signs of corrosion. The decision was that the chambers had to be de-humidified.