Views showing the locations of the strengthening works 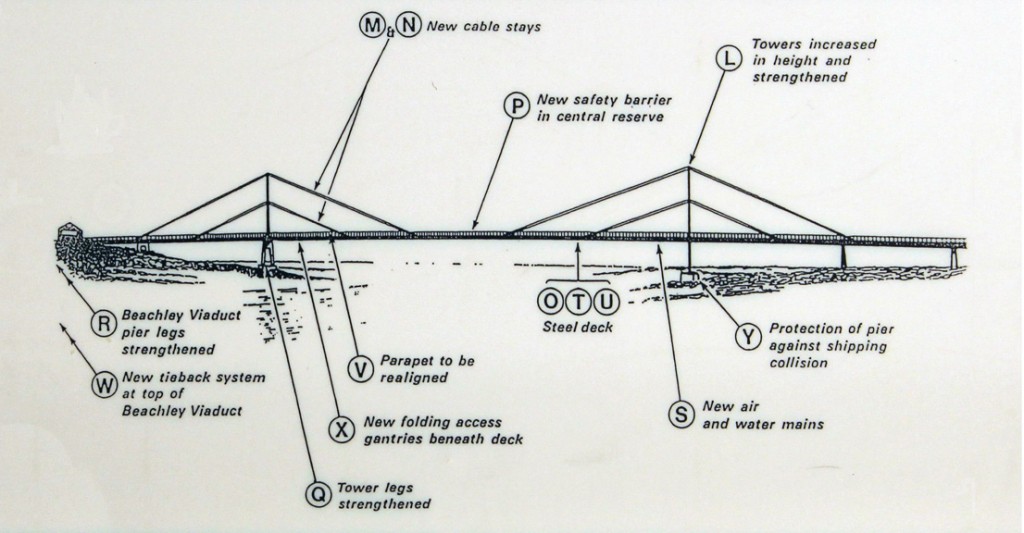 All the significant items of strengthening work on the Wye Bridge and viaducts are indicated on these two diagrams. The most obvious work was to the cable stay arrangement. It must be remembered that, before strengthening, the tops of the single towers of Wye bridge were much lower, with only one pair of inclined cables suspended from each. 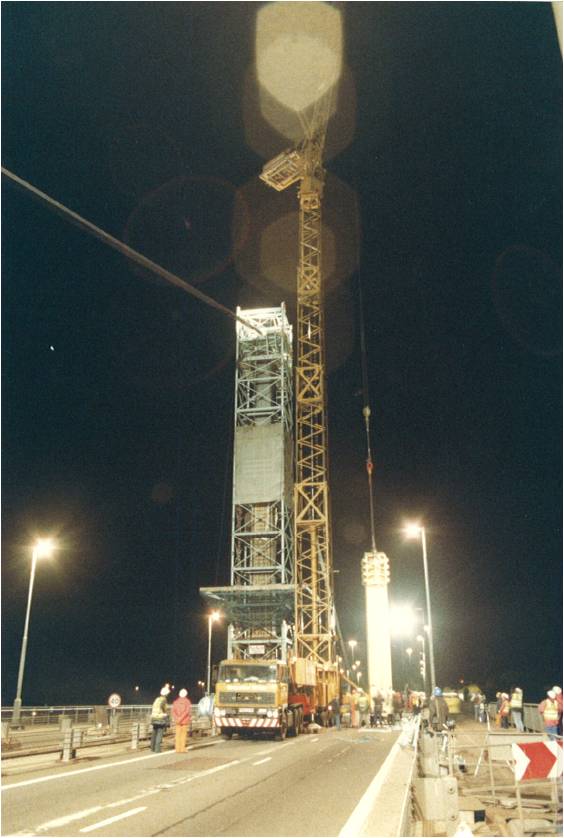 The viaduct trestles(R) and those of the main piers (Q) of the Wye Bridge and Viaduct needed strengthening to cater for the specified increase in vertical traffic loading and transverse wind loading.  The vertical reinforcement was made by adding additional plating to the lower portions of the trestles. The upper corners of the trestles were provided with gusset plates.  In both instances the plating was fixed by a pattern of bolts which were tightened before being welded all-round to seal the edges and provide additional structural contact. The existing bearings at the top and bottom of these elements were checked and found adequate for their purpose.

The lower parts of the two towers (pylons) below the new lower inner cable saddles were also reinforced by double plating which was attached in the same mixture of bolting and welding.  The parts of the towers above the lower cables did not need reinforcement as it was now carrying somewhat less vertical load than in its original configuration. The towers were also increased in height (L) to suit the new cable configuration (M) and (N).

The height of the central towers was extended and additional cable stays were introduced to support the box-girder deck at closer centres so that it could carry the increased design traffic load.  The original cable stays, with 20 strands in a tight triangular configuration, were replaced by two open arrays of 12 strands each of slightly larger cross-section. This new configuration has the added benefit that any strand can, if necessary, be replaced without closing the bridge. 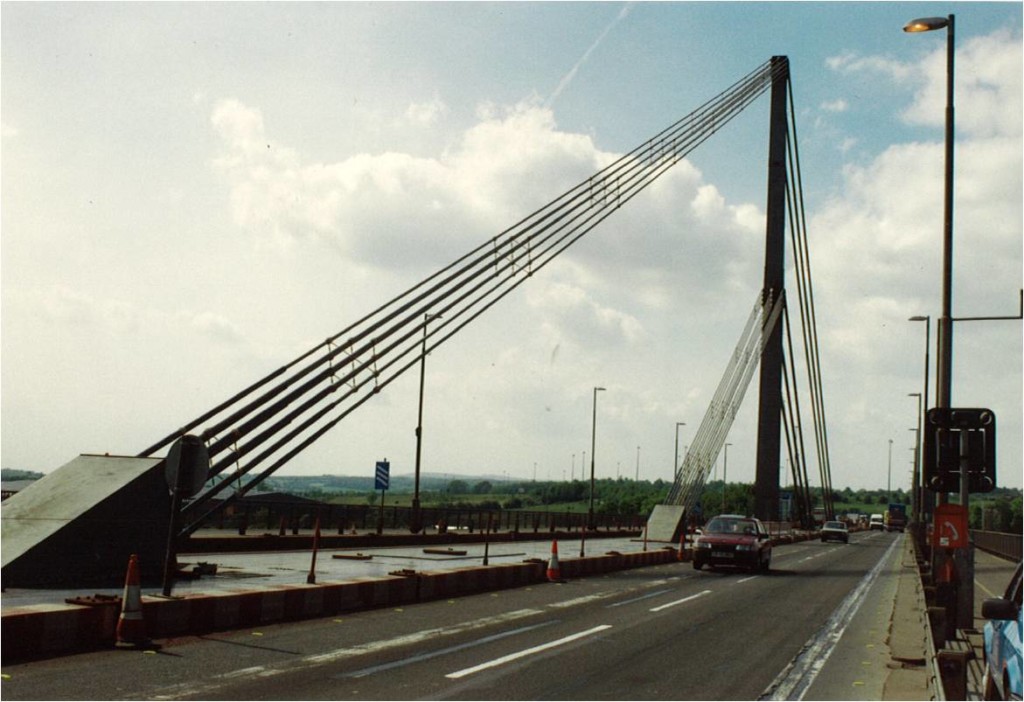 The re-configuration required eight new cable anchorages inside the deck sections. The existing towers were strengthened and given new cable anchorages and saddles for the new cable-stays. New tower extension pieces were attached to the tops of the existing towers. This was the only part of the strengthening work that required the complete closure of the Crossing, on just two occasions.

O,T,U&X. Steel Deck
The trough stiffener to deck welds under the wheel tracks were replaced, as on Severn Bridge, and stiffening was provided between the deck box and the cantilevers.  New under-deck travelling maintenance gantries were provided and joints on the underside of the deck were inspected and repaired.  New folding gantries on the upstream side provided access between new manholes in the cycle track and new manholes in the sloping side of the box deck.

P. Central Reserve Safety Barrier
The original wire rope safety barrier in the central reserve of Wye Bridge was replaced by higher and stronger steel barriers to provide greater protection to the towers and cable stays.

Q,R,S,V,W&Y Other Work
The towers of Wye Bridge were strengthened internally and externally and the viaduct pier legs were strengthened externally.  New compressed air and water mains were provided for future maintenance and the parapet was realigned.  A new tieback system was installed, connecting the top of Beachley Viaduct to the Severn Bridge anchorage, in order to resist longitudinal forces.  The base of one pier in the river was enlarged to provide protection from shipping collision.

The steel box girders of Aust viaduct were also strengthened and new access and strengthening was provided to the steel box columns. New maintenance gantries and platform were installed to improve access. Although distant from the navigation channel, it was thought prudent to construct new concrete collars to protect the Aust Viaduct piers against shipping collision.  The risk was felt to be slight but was enhanced by the habit of pilots to line up ships to head directly for the piers when guiding them up the channel. It was decided that the Aust Viaduct piers needed strengthening against ship collision and one pier of the Wye bridge needed similar work. In addition, the towers on each of the main span piers needed to be raised to allow the new system of cable stays to be installed.

Traffic Control during all the Works.

Meticulous planning was required to minimise traffic disruption while this work was in progress. Except for two complete night-time closures of four hours each for the lifting of the extensions to the Wye bridge towers, the bridges were kept open to traffic throughout the strengthening work albeit with off-peak lane closures at times. More than 100M vehicles used the crossing during the first five years of the project without a single fatal road traffic accident.