The two largest caissons, 13 m wide by 53 m long, were used to construct the foundations for the bridge pylons. These caissons weighed 2,000 t each which was the maximum weight that the construction equipment could manage. The design for the shells of these caissons had been dominated by load effects during their construction in the casting yard. Special bracing was needed, both for the manufacturing process and for the journey from the construction yard to the bridge site.

The process of producing and transporting these very large 2000 ton caissons was identical to that used for the viaduct caissons (see Construction of the Viaduct Foundations). Special care was taken in choosing their precise locations in the estuary because of the proximity of the main navigation channel, with its extreme tidal range and fast currents. The caissons were placed in the lead up to high tide, using the very large double sheer-legged cranes, mounted on a jack up barge (a large barge with special supports in each corner that could be jacked down to the river bed to provide a firm foundation for deploying the cranes). Additional temporary restraint was provided by hydraulic jacks fixed to steel beams that had been concreted, at low tide, into holes in the rock around the outside of the caisson. As in the case of viaduct foundations that were considered to be at risk of ship impact, the pylon caissons were filled with in-situ concrete as soon as they had been made fast.

The hollow pylon legs each rise to a height of 137.2 m above the caissons, 149 m above ordnance datum. With the exception of the crossbeams and the anchorage tie beams, they were constructed entirely of reinforced concrete. Each pylon required 38 separate lifts of concrete, of between 3.5 m and 4.48 m in height, starting at the top of the caisson and using self-climbing formwork. Concrete for the pylons was produced in a batching plant located on the caisson and it was placed by skip, using tower cranes anchored to the pylon. The top of the caisson was also used to store materials and provide temporary accommodation for the workforce. 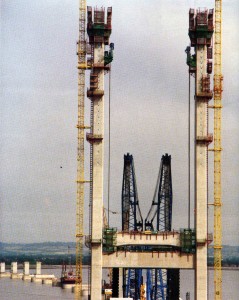 The crossbeams and anchorage tie beams were prefabricated on shore. The crossbeams were transported to the pylons, in the same manner as the caissons, being lifted off the transporter vessel using cranes mounted on a jack-up barge to provide a stable platform. The lower crossbeams weighed 1400 t each. Each was lifted on to the partly constructed pylon and was then cast, in situ, into the pylon itself, during the next concrete pour. Later, the upper crossbeams, weighing 900 t each, were lifted to rest, temporarily, on to the previously fixed lower beams and, when the pylons were nearing completion, they were raised to their eventual positions, using strand jacks mounted on brackets fixed to the pylons. They were post tensioned to the pylon using seven pairs of stressing cables which were then grouted into the structure. The cable anchorage tie beams were lifted into position by a tower crane located on the completed lower cross beam.

The task of placing the concrete was complicated by the complexity of the steel reinforcement, especially in the vicinity of the cable anchorage locations. Because of this difficulty, and the fact that each anchorage has its own unique orientation, the anchorage tie beams were cast on-shore where the position, and the vertical and horizontal alignments of the anchorages, could be more easily controlled in a purpose-made formwork jig on-shore. 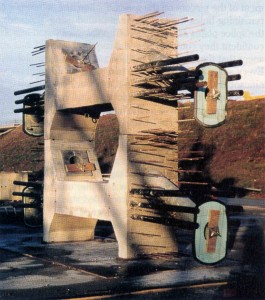 During the design process, it became clear that plain reinforced concrete pylons would not be able to cope with the design bending moments and so each pylon was pre-stressed vertically. Following their completion, 16 vertical tendons were positioned in ducts within the hollow interior of each, and then tensioned. The cables were anchored beneath the level of the lowest cable anchorage and, again, into a slab at the top of the pylon. The program dictated that both pylon legs should be under construction at the same time, necessitating two complete sets of construction equipment. 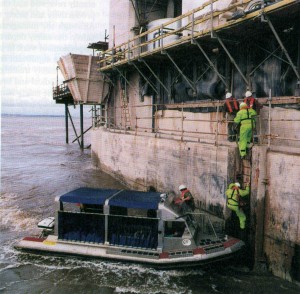 Access to both pylons required careful planning. The Avon pylon was connected to shore at low tide, by the temporary causeway, while the Gwent pylon had to be accessed from the Avon shore by boat – across the Shoots Channel. At high tide, a boat or barge was the only means of access to either pylon. A small jetty was constructed on the Gwent shore to assist the transport of personnel to the Gwent pylon.