The concession for the design, construction, financing and operation of the Second Crossing was awarded to the consortium, Severn River Crossing, plc (SRC) at the end of 1989 and the Agreement was signed in October 1990. Construction work could not start until the necessary legal powers had been obtained from Parliament. This was a complex and lengthy process requiring a major input from SRC.

The Severn Bridges Bill was put before Parliament in the 1990/91 session and details were made public. Consultations took place, especially with those directly affected. The Bill was subject to two readings in the House of Commons and a Select Committee was deputed to consider the various petitions made against it. A number of concessions and amendments were introduced and the Bill received Royal Assent on 13 February 1992. The four year construction period and the much longer concession period both started on 26th April 1992.

The consortium, Severn River Crossing (SRC), had been established by two leading European contracting companies, Laing from Britain and GTM from France. They relied on SEEE, the highly respected design arm of GTM, for the pre-tender designs.  Halcrow, engineering consultants with long experience of British design and checking procedures, then joined the consortium to work with SEEE. All calculations for the final designs were checked independently by other approved consultants, in accordance with normal British practice.

The terms of the concession made SRC responsible for both construction, and the day-to-day supervision of construction. The two functions had to be separated within SRC to ensure that the interface, involving compliance with technical specifications and conditions of contract, was properly managed. Consultants Maunsell were appointed as Government Agent to oversee this interface and to ensure that SRC complied with the terms of the concession agreement which included a general technical specification and a number of special requirements for this particular project.

Heads of Agreement had been signed in April 1990, prior to the completion of negotiations over the concession agreement. This enabled SRC to commit significant resources to their preliminary investigations, in the knowledge that all essential expenditure would have been reimbursed by the government in the event that the Government failed to procure the necessary legal powers.  It provided SRC with two years to refine their designs and complete their preparations for construction before work started.  They made good use of that time, scouring the globe to source the plant and equipment they would need, especially marine plant.  They were also able to order, and have delivered, a bespoke gantry for transporting the viaduct deck units over the last leg of their journey from the casting yard to their position in the deck.  It was a luxury not afforded to many contractors and was undoubtedly a factor in the high quality of the work throughout and the quality of the finished product.

While awaiting completion of the parliamentary process, SRC established a number of key principles that would be applied throughout the job. They included:-:-
1. Maximum use would be made of pre-casting and prefabricating on dry land, to minimise work done off-shore.
2. Where possible, prefabricated units would be standardised.
3. Where possible, the use of in-situ concrete would be avoided.
4. High strength friction grip bolts would replace site welding where possible.
5. Maximum size and weight limits would be established for all items that would be lifted on site or transported by river barge, to reflect the capacities of the lifting equipment and the ships acquired.

Details of the Illustrative Design 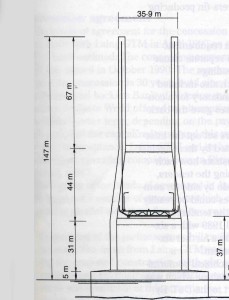 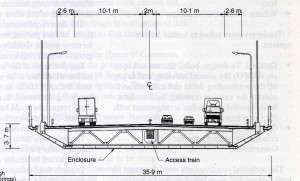 Cross Section of the Deck

The Government’s tender documents included a detailed “illustrative design” for the whole structure that would provide the river crossing. It had been prepared by the government’s consultants, to assist tenderers in their initial assimilation of the problems to be faced. Use of this design was advisory, not mandatory, its sole purpose being to give tenderers a helpful start in working up their own proposals. In the event, all the tenderers found it helpful and made considerable use of it, while introducing different amendments of their own.  Some of the changes introduced by the consortium were revealed in their submitted tender, others were made after the tender had been accepted, so the job, as built, was not necesarily identical to the tender drawings.  Details of the illustrative design provided by the government are displayed below.

SRC’s designs were similar to that of the illustrative design and attention will be drawn to major departures. One important change was to adopt 98m as a standard for all viaduct spans, rather than using two modules, as suggested on the illustrative design. This reduced the numbers of caissons and piers, and the number of deck gantry movements. It also standardised, still further, the manufacture of the deck units and it enabled the contractor to complete the whole viaduct without having to undertake the modifications to the gantry that would have been necessary, if certain spans had been longer than others. The change, which was welcomed by the Royal Fine Arts Commission, was made feasible through the introduction of an innovative redesign for the two viaduct foundations immediately adjacent to the line of the Severn Railway Tunnel. That, and other less dramatic changes to the illustrative design, will be explained in the following sections. 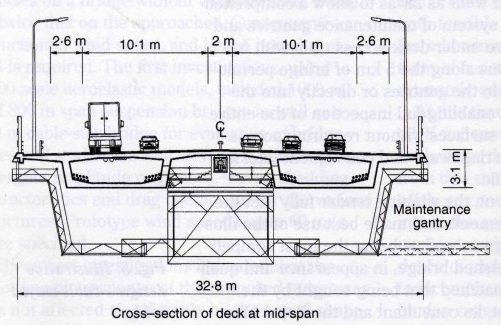 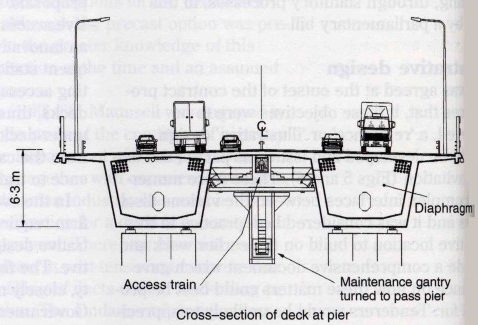