The crossing includes a total of 4.2 km of viaduct in two sections, one on either side of the cable-stayed bridge, each comprising 20 standard spans of 98.12 m. Twin box girders were used in preference to a single, wider box, because the smaller, separate units would be easier to handle and would not need to be post-tensioned transversely. Also, there would be space between the twin box girders for an under-slung train to provide access for maintenance, along the whole length of the structure. Both box girders, in every span, contain 27 separate viaduct segments, each 3.5 m in length. In addition, a special segment of similar length was placed on every pier. Each of the twin box girder flanges would be 15.6 m wide and there would be a 2 m concrete stitch between them, bringing the total width of the viaduct deck up to 33.2 m.

The key to the load bearing strength of the viaduct spans is the use of the high tensile steel tendons that would be added during the actual construction of the viaduct deck. The tension would be introduced into the tendons and then locked in, using wedges or anchors in a process known as “post-tensioning” (because the stress is introduced after the individual deck segments have been constructed separately, and then positioned). Each new deck segment would be introduced and held in position while temporary tendons would be used to tension it sufficiently hard against its predecessor to ensure that it would remain secure when the lifting tackle was removed. Later, the temporary tendons would be removed and replaced by the permanent set. 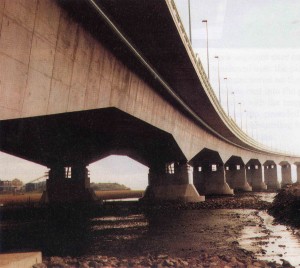 The soffit of the viaduct deck shown on the Illustrative Design was curved. However, the consortium rejected this idea in favour of the tri-planar form illustrated on the photograph. This would avoid having to use a large number of blocking devices around the upper surface of the lower flange to insure that the lower tendons followed the line of the curve fairly closely. With this change, the number of blockers or deflector diaphragms within each span was reduced to two, thus increasing the speed of production and reducing cost.

The Consortium had to comply with special government requirements relating to the use of tendons. When used for post-tensioning the precast concrete units together, tendons must be “external”, i.e. they must remain accessible and replaceable, even when enclosed within a hollow structure – and the free length of any such tendon must not exceed 40% of the span. SRC’s solution was to fit internal restraining devices, mounted on what could be described as a vertical diaphragm, at each of two locations within the span, to grip and hold all tendons passing those points and, in some cases, to act as a deflector to change the direction of the tendon. 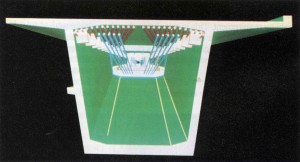 Internal vew of girder with pre-stressed tendons in place 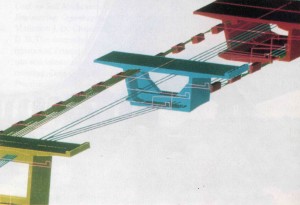 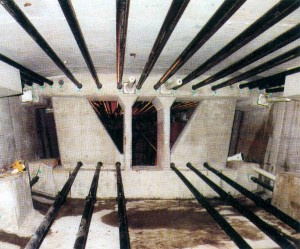 In total, 2,400 separate deck segments, each 3.5 m long, would be installed in the viaduct. They would be constructed on shore, in the form of a hollow reinforced concrete box open at both ends and weighing up to 200 t. In elevation, the viaduct segments are 7.0 m deep at the piers and 3.95 m deep through the central section of the span. See illustration. Care had to be taken to optimise this design because the tri-planar form is less pleasing to the eye than the curved option. The addition of a 2 m wide in-situ concrete stitch between the top flanges of the twin segments of the viaduct box girders, would enable the in-situ concrete deck slab to be laid right across the width of the deck in a single operation. 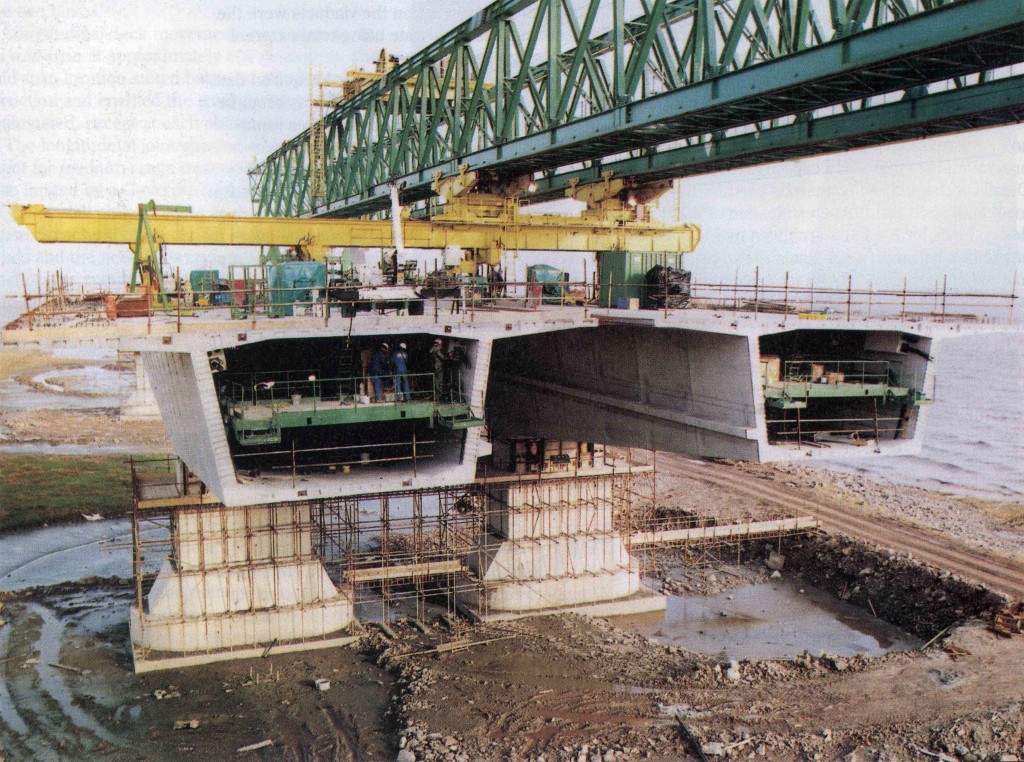 Access to the deck for maintenance is provided by a train that runs on rails under the central reservation, in the void between the two boxes. A number of conventional gantries with working platforms underneath the deck would also be provided and they would also allow for access up on to the top of the deck. These gantries would be suspended from both outer edges of the deck and they would be able to move horizontally along the deck.

Longitudinal movement joints are provided at the centre of every fifth span, i.e. 392.48 m apart, to restrict progressive collapse of the structure. This means that there are five separate, homogeneous sections of deck on each side of the cable-stayed bridge, each capable of small longitudinal movements, relative to its neighbours. The actual joints are inserted at mid-span to ease arrangements for maintenance. They comprise stainless steel/PTFE sliding surfaces which allow longitudinal deck movements, while restricting movements in other directions and, in doing so, they transmit vertical and horizontal shear forces from one side of the joint to the other. Similar joints are provided at the junctions between the viaduct and the main bridge, and at the two end abutments.

The viaduct deck is supported by elastomeric bearings (essentially, large thick rubber pads) located on each pier. These bearings transmit vertical and horizontal forces from the deck to the piers. Each section of deck therefore rests, or “floats”, on elastomeric bearings. No point of the deck is actually fixed and so each section can move a short distance, independently of its immediate neighbours. This enables temperature length changes, together with braking and seismic forces to be distributed over several piers.

Seismic activity provides the critical loading case for the bearings which are designed to restrict the pier’s horizontal acceleration. The bearings must be large; 1.3 m x 1.3 m and 500 mm deep, to cope with the seismic loading. Lateral deformations for the seismic design case are estimated at between 150 mm and 200 mm, while the maximum deformations for more normal loading conditions are expected to be in the region of 80 mm. A fail-safe shear key device is incorporated into the pier head to restrict movement in the case of a seismic event. Every bearing was shear-tested for normal in-service loads, and prototype bearings were subject to a full range of tests, including a shear load representing the full ‘design’ seismic load.

Every deck segment located over a pier must be vertically post-tensioned to that pier to provide the required stability against out-of-balance loadings that will occur during erection of the deck, especially during the construction of the balanced cantilevers, described later under “Construction of Viaduct Decks”.

The viaduct widens out by 13 m over the last 240 m at the Avon end, to accommodate the slip roads from the M49 junction. Here, the central part of the deck between the viaduct’s two concrete box girders, comprises an in-situ reinforced concrete slab supported on 2 m deep precast concrete beams which span between the inner webs of the box girders.