The viaduct required the building of more than 40 pier foundations. It was a major and spectacular operation that could be seen from both sides of the estuary. The ground conditions immediately beneath the piers varied from the exposed rocky out crops of the English Stones, in the east, to soft alluvial soils in the west. 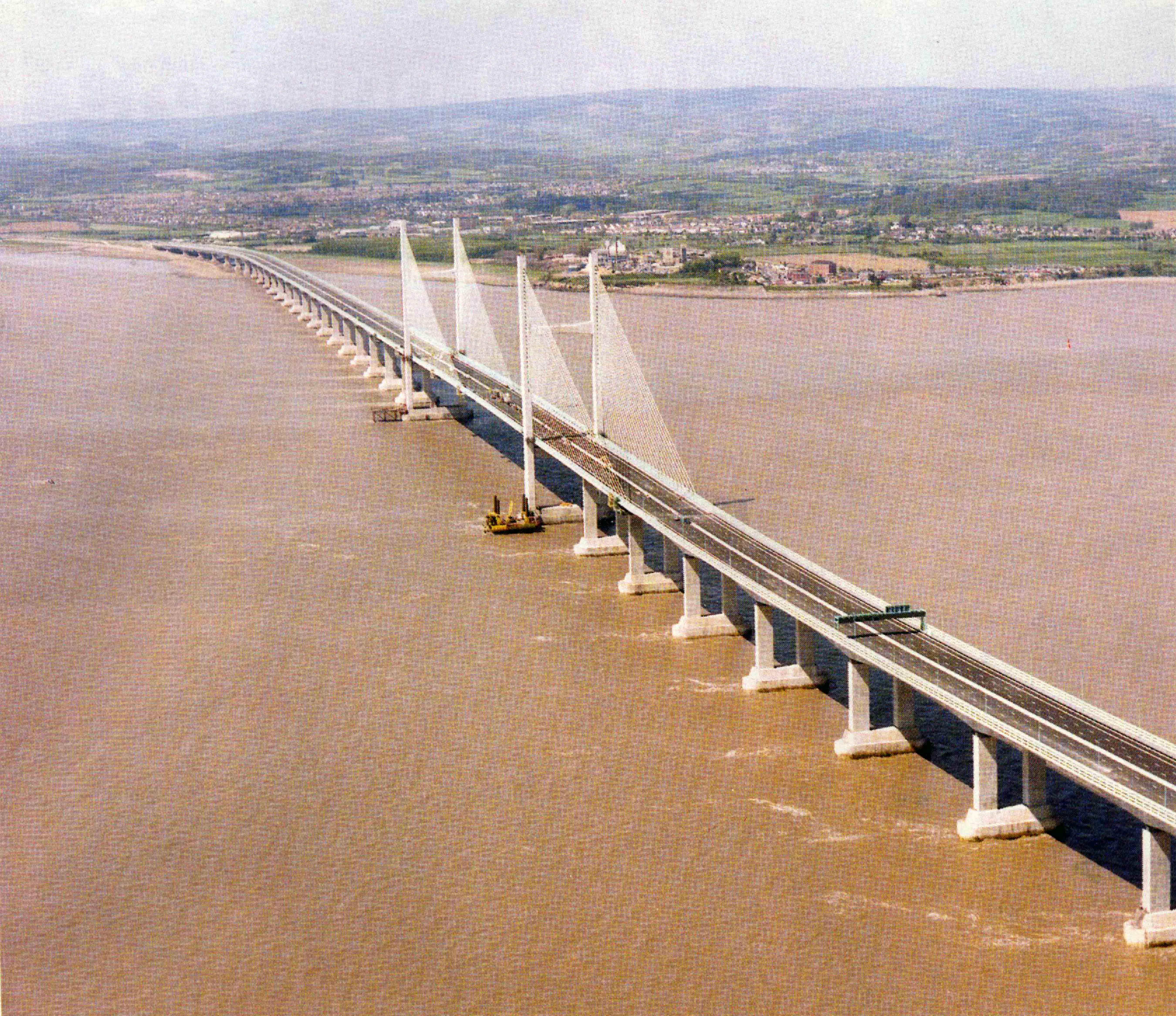 Another important and sometimes over-riding factor, was the strength of the tides for long periods, between high and low water. Caissons were ideal for the rocky conditions over the English Stones on the east side of the estuary, while the softer material near the Gwent shore, required piled or spread footings. SRC decided to use pre-cast caissons, hollow reinforced concrete shells weighing up to 2000 tons, for the majority of locations (33 out of 40), including all the more difficult locations.

The foundations are needed to deal with the dead weight of the viaduct itself, together with the live load of traffic, as well as a potential ship impact. The frictional shear resistance between the base of the caisson and the exposed bedrock, together with the shear strength in the bedrock beneath, would be crucial in resisting ship impact. This further reinforced the preference for large spread foundations, with high sliding resistance, especially in locations that might be at risk from ship impact. 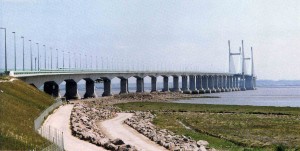 The view of crossing from Aust. Copyright; Neil Thomas of Photographic Engineering Services 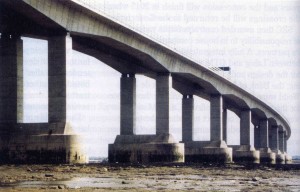 The forces on the caissons varied according to location and a decision was taken to develop three modules, differing in size and weight, to cope with these variations. The caissons were all cast in the Avon construction yard and transported to site on powered barges. They had to be buildable and robust in the extreme conditions that could occur on the Severn Estuary, with a tidal rise and fall of up to 14 metres and current velocities up to 5m a second.

Special attention was paid to the two piers, located either side of, and adjacent to, the Severn Railway Tunnel near the Avon Bank. The tunnel is 140 years old and it carries the main line from London to South Wales, so any risk of damage to the structure would be unacceptable. In order to protect the tunnel, an exclusion zone, centred on the tunnel and 30 m wide, was established to prevent additional loading or vibration that might damage the tunnel.

The problem is illustrated on the drawrings below. The tender drawing is on the left, with the centreline of the viaduct passing horizontally across the centres of the two caissons. SRC’s modification is shown on the right. 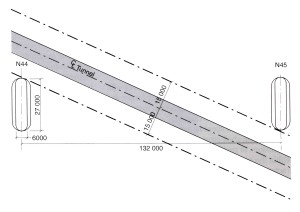 Arrangement shown in the tender drawings 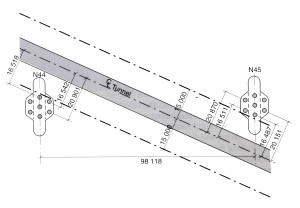 SRC’s first step was to amend the illustrative design provided with the Invitation to Tender, by standardising all viaduct spans at 98m.  Then, a special pile layout was designed for the two piers on either side of the tunnel, with a platform above the piles in the form of a modified caisson. As shown on the diagram, this allowed the edge of the caisson to be cantilevered out above the safety area designated by British Rail around the tunnel, without imposing any additional pressure or stress on the tunnel, either from the piling or the caisson. After lengthy negotiations that concluded with agreement to install a comprehensive system of instrumentation in the tunnel to continually monitor for possible movements, SRC were allowed to proceed with their proposals. 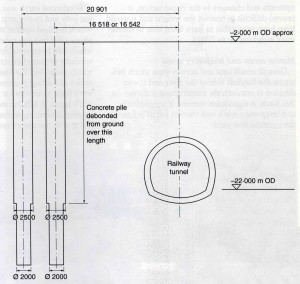 An interesting fact emerged from this story. When the monitoring instruments, mentioned above, were installed in the tunnel and the whole installation was switched on for testing prior to the commencement of work, it became clear that the shape of the tunnel is not constant. Its internal height varies by an amount that can approach a centimetre, according to the state of the tide. Measured from the base of the tunnel, the soffit (top) moves up and down with every tide. Presumably, it has been doing this, twice a day for nearly 150 years! The tidal range that occurs at this very point, up to 14m, is the second highest in the world.

British Rail’s acceptance of the modifications to the these pier foundations, proposed by SRC and described above, opened the way for the viaduct span over the Railway Tunnel to be reduced to 98m, which SRC then chose to adopt as the standard to be used for the whole viaduct.  The agreement reached on this particular item, in turn,  opened the way for SCR to gain acceptance for a further modification that was very important to them.  The terms of both the Concession Agreement, and the formal contract that followed , required SRC to obtain approval from the Royal Fine Arts Commission (RFAC) for all modifications they intended to make to the Illustrative Design for the River Crossing.  Most significantly, SRC wished to replace the curved soffit of all the viaduct spans by a tri-planar shape which would be much more efficient from a structural point of view, less expensive and quicker to build.  Internal structural maintenance, especially the replacement of internal pre-stressed cables would also be safer and easier to manage.

It became clear from the start of discussions on this subject that the RFAC had strong reservations to both tri-planar soffits and to the use of a longer viaduct span over the Railway Tunnel.  It was only when SRC managed to find a practical solution, acceptable to British Railways, for reducing the length of the span over the Railway, that their attitude began to soften.  Officials in the Government Agent’s office gained the impression that the use of tri-planar soffits for the viaduct spans would not have been acceptable to the Royal Fine Arts Commission, without prior agreement to the use of a standard span throughout the whole length of viaduct. However, having gained permission to proceed with their proposal for revising the pier foundations adjacent to the railway tunnel, SRTC were able to opt for a standard viaduct span throughout and this led to permission from the RFAC to build the viaduct units with tri-planar soffits. 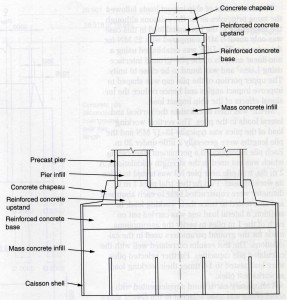 Elevation of a pier over its cassion

The illustrative design for the viaduct piers prepared by the government’s consultants, was based on the use of in-situ concrete piers, each standing on a caisson. However, in order to maximise the amount of work done off-site, the consortium elected to use hollow precast concrete units for the 37 piers that were not accessible from shore-based plant. The revised piers would vary in height from 7m to 40m, with a footprint of 6m x 3.5 m and with walls 500 mm thick. When completed, they would need to be post-tensioned, vertically, to the caissons below. Each pier would stand on a 1 m deep starter unit, cast on top of the caisson while, at the top of the pier, a standard 5.5 m high pier head unit would support the plinth that would carry the viaduct bearings. The balance would be made up of standard 6.5 m units and a unit of variable height. The maximum weight for any precast unit was set at 180 t to suit the lifting plant. 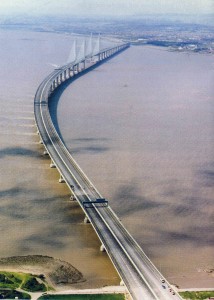 Before leaving “Design of Viaduct Piers”, it is worth noting that adjacent piers are linked together to enable a number of them to work together in the event of ship impact. The next section of more detailed information, on the design of the viaduct deck (go to botton of current section and click on link to return to Main Text. Then click on the next available link in that text, “For more on Design of the Second Crossing Viaduct Deck”). This second tier element describes how the deck has been divided into eight separate sections, each four spans in length on either side of Shoots Bridge.  Each four span section has been prestressed longitudinally to form a homogeneous beam. The sections are separated from their immediate neighbours by longitudinal movement joints located mid- way between two piers.  These joints will reduce the effect of an impact on any one pier because it would be resisted by several piers acting in unison.

SRC decided to strengthen the piers by inserting pre-stress tendons into the side walls of the pier units, where they would be most effective in resisting lateral forces. The difficulty of anchoring the tendons below the pier, while ensuring that they would still be available for stressing and eventual replacement, was overcome by setting a U-shaped steel duct into the concrete at the top of the caissons. More information about this feature is given under “Building the Viaduct Piers”.