The main pier foundations for the cable stayed bridge were positioned on the English Stones, near a rocky outcrop known as Gruggy. They had to avoid nearby fault lines and keep clear of the deep and steep-sided channel that had been carved out over time and was now the main navigation channel, known as The Shoots, with its peak currents and turbulence.

The foundations had to withstand the dead and live loads from the bridge and be able to cope with possible ship impacts. They were carefully positioned following extensive investigations. A number of special navigation aids for the use of pilots on ships using the estuary were agreed with the Gloucester Harbour Trust, including a harbour radar system which replaced the previous unsightly proposals for ship protection islands in front of those piers that would be most at risk. These protection islands would have been capable of inflicting considerable damage to errant shipping.

Once again, caissons were deemed to be the most suitable choice for foundations in these conditions. They would be larger than those used for the viaduct, measuring 53 metres in length by 13 m wide and weighing 2000 tons each. They were designed to withstand impact from ships weighing 6500 t. The caissons would be heavy enough to prevent overturning and shear keys, in the form of 2 m dia. tubular steel piles cast into 2 m deep holes but allowing the upper parts of the piles to be encased in the concrete infill that was then poured into the bottom of the caissons, would resist any sliding which might otherwise result from ship impact.

The main piers of the bridge were designed to look similar to those of the viaduct. And although the caissons used in the main bridge foundations were larger than those for the viaduct, similar design criteria were applied. Back span piers were added to prevent the back spans from being lifted by loading on the central span. (see more information on Design of the Shoots Bridge Deck).

The navigational channel in the vicinity of the crossing, known as The Shoots, is located in a deep but relatively narrow natural trench, little more than 300 m wide at river bed level. A symmetrical cable-stayed bridge, the centre-piece of the new crossing, would be constructed across this channel, with a main span of 456 m and a total length of 900 m. It is linked to the shore by major viaducts on either side, both 2 km in length, bringing the total length of crossing to 5 km. Following consultations with shipping interests, the clearance of the bridge was set at 37 m above mean high water level. This allowed for a notional rise in sea level (as a result of global warming) of 1 metre. 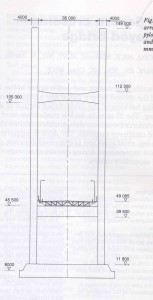 Two twin-legged portal-frame pylons, rising 149 m above the river bed (101m above deck level) provide the main features of the bridge. Each pylon leg includes the upper anchorages for 60 cables, thirty of which radiate down on to the main span and 30 to the back span, making a total of 240 cables in all. The cables pass through openings in the concrete bridge deck, which is 34.6 m wide, but they are actually anchored on top of the deck steelwork.

The 456 m main span reflects the need to locate the pylons at a sufficient distance from the steep side slopes of the main channel to ensure the stability of the bridge foundations. Additional stiffness for each back-span is provided by two piers that are similar, in both appearance and spacing, to the piers supporting the viaduct.

The base of the pylon legs are 10.2 m wide, along the line of the bridge, reducing to 5.4 m at the top. Transversely, they are a standard 4.0 m wide. The legs of the pylons are constructed in reinforced concrete, using the “lift over lift” method, with the aid of self-climbing formwork. The legs are hollow, with lifts and steel stairs installed to provide access from the caissons to the deck level and to the top of the pylons. The importance of the pylon proportions to the appearance of the bridge was widely appreciated and was subject to much scrutiny from the architect, the engineers – and the Royal Fine Arts Commission.

Each pair of pylons is provided with two hollow, precast reinforced concrete cross beams for transverse stiffness. In order to reduce the amount of steel reinforcement required, these upper cross beams are post-tensioned. To cope with the tensile, splitting forces caused by the cables anchored on either side of the pylons, small precast beams have been fitted across the internal space between the front and rear faces of the pylons and post-tensioned. The tendons for this operation are contained within ducts and anchored outside the pylons. Hot wax is injected into the ducts to exclude air and water and so protect the tendons. The anchorages for these tendons are visible between the exit points of the cables.

There is a tendency, under certain loading conditions, for the weight of the deck to be lifted off the back span piers. This can produce significant bending moments in the pylons and, to cope with these moments, the pylon legs need to be post-tensioned vertically. 16 vertical tendons, each comprising 19 strands, are installed within HDPE (high density poly-ethylene) ducts in the front and rear walls of the hollow pylons, and tensioned. The tendons stretch from a point below the first cable anchorage, to the slab at the top of each pylon leg.