Modern cable-stayed bridges were only starting to be considered in the UK at the time that the first Severn road crossing was being built. And it was not until later, when electronic computers became widely available for engineering calculations, that the load bearing capacity of the more complicated cable stayed bridges could be analysed with any real confidence.  In the earlier circumstances, engineers were reluctant to break new ground. In fact, 25 years later, when construction of the Second Crossing got underway, no cable stayed bridge in the world had been completed with a longer span than the one that was then under construction on the Severn. However, before the Second Severn Crossing was completed, the French had taken a great leap forward with the opening of the Pont de Normandie (main span 856 m). And since then, with developments in design and stronger materials, further great strides have been made with main spans now 1,000m and longer. Having said all that, the Wye Bridge is a simple, but very important, early example of a cable stayed bridge.

The deck units chosen for the viaduct enabled the contractor, Cleveland Bridge of Darlington to complete each full span of 64 m using a simple cantilever method of construction. 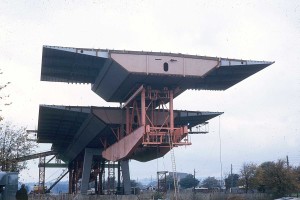 Calculations confirmed that the same method could be used to erect the side spans of the bridge. However, some additional strengthening of the deck would be required if the same cross section of deck unit were to be used for the main span of 235 m. The obvious way to proceed with this span would be to work from both sides, building two half span cantilevers that would meet each other in the middle. Some method would then be needed to lift both the leading edges to the correct height (even when stiffened, both sections of unsupported deck would have drooped, to a significant extent, under their own weights). 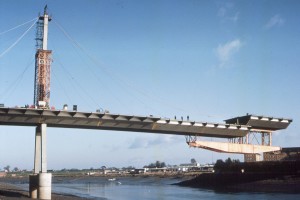 The addition of two simple elements of “cable-staying” would kill both birds with one stone, stiffening the whole of the bridge deck sufficiently, and providing means of lifting the leading edges of the cantilevers when required.  It was achieved through the addition of two towers and two long lengths of high tensile steel cable. This well targeted response provided a very efficient solution, enabling the Wye Bridge to be completed successfully and in accordance with the loading criteria of that period.

It is interesting to note that when the nearby M4 Avonmouth Bridge came to be strengthened in the 1990s (for the same reasons as the Severn and Wye Bridges), the method chosen to upgrade its load carrying capacity was, in principle, exactly the same as that used to build the Wye Bridge.  However, in that case, the original box girders were deeper than over the Wye and so it was possible to achieve the additional strengthening using high tensile steel cables that were post-tensioned and fixed entirely within the original box girder.

The cable stays on the Wye Bridge do not carry the whole weight of the bridge deck and the traffic, but they effectively take part of the load by adding a new set of supports. The tension in each cable has an upward component of force, which gives support to the bridge deck, and a component of compressive horizontal force, that is absorbed by the bridge deck.