At the time of the design of the first Severn Crossing, the relevant live loading for such a bridge would be based on the assumption that the proportion of heavy vehicles in the traffic flow would be about 15%. This figure was based on observations undertaken in the late 1950s. It was also assumed that the heaviest loading would occur when traffic became halted on the bridge, forming a stationary queue with minimal distances between adjacent vehicles. In such circumstances, the impact on the bridge from heavy vehicles would be softened by the presence of lighter vehicles interspersed between them. 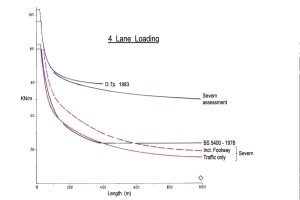 By the early 1980s, traffic counts were showing a much higher percentage of HGVs on the majority of the country’s strategic road network. It was then averaging between 30% and 33%. This was due to the increased value that operators were then attributing to two of the advantages that the motorways and improved trunk roads provided. The first was the actual savings in journey times. The second, possibly more welcome, was the increased reliability of those journey times, which is so important when operators are trying to work to tight schedules.

The widespread availability of computers by the 1970s led to the development of mathematical traffic models which provided data to inform decisions on many problems in the landuse/transportation field. Typically, these models would consist of a representation of the road network covering the area under investigation, a breakdown of that area into a number of discreet zones, a data base containing information on the traffic flows from each zone to every other zone (compiled from roadside interviews) and various tools for assigning traffic from the data base to the road network, etc. These models could be validated by comparing their forecasts for “the present day” against an independent set of data. 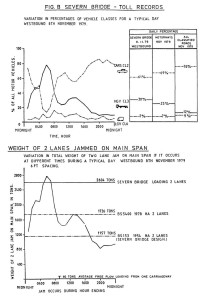 A model of the type described above was used to forecast the worst case loading on the Severn Bridge, prior to the strengthening work. An assessment was required of the aggregate weight of a stationary queue of traffic on the bridge, with minimal distances between adjacent vehicles. The traffic model provided forecasts of the proportions of the various types of vehicle that would use the bridge during a particular period. A separate application then selected vehicles from this mix, randomly, to generate many different queues, each conforming to the vehicle type proportions and spacing requirements, and then it calculated the load represented by each queue in terms of kN per lane meter. The figure taken forward was the load exceeded by 5% of the queues. For the Severn Bridge in the mid 1980s, this figure proved to be 9 kN per lane metre, which happened to be twice that for which the bridge had originally been designed.

The weights of the actual vehicles crossing the Severn Bridge were also measured by placing a weighbridge in the carriageway. This showed that the flows were not entirely random. Many operators of heavy lorries favoured an early morning start, when there would be relatively few cars and other light vehicles on the road to dilute concentrations of lorries. Unless that kind of situation were managed, it could result in queues being formed on the bridge with more than 30% of heavy vehicles, generating a 5-percentile loading of up to 12 kN per lane metre. Fortunately, the timely arrival of the Second Severn Crossing, in the mid-1990s, took much of the sting out of such speculations.