The taking off point for the John Howard contract was the 135 foot (42 m) high Aust Cliff. A 25 feet (7.5 m) deep cutting was excavated through the Aust Cliff to create the approach to the main deck level at 120 feet (37 m) above mean sea level, at centre span. The Aust Pier was founded on a tidal limestone outcrop known as the Ulverstone Rock. It was about 1600 feet (500 m) offshore, separated from the land by a deep channel and exposed only for a brief period at low water. Access to the location of this pier was provided by building a temporary viaduct to a working stage above high water at the Ulverstone Rock. 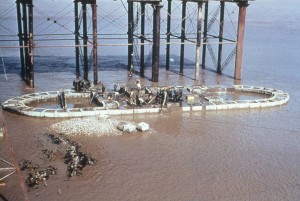 A mobile drilling platform was set up adjacent to the pier location and used to construct the working stage, made from prefabricated steel sections. The staging was sufficiently robust to bear the weight of the sections of the main tower which were, later, off-loaded from barges. The access viaduct was also used to transport the concrete and reinforcing steel used in constructing the East anchorage and, later, the pier. In order to prevent over 15500 tons of pier construction being swept away by fierce tidal forces, steel rods were grouted into the surface of the rock below while it was exposed between tides, and used to secure a ring of pre-cast concrete blocks that would form the base of the outer shell of the pier foundation. Each of the higher levels of precast concrete blocks were set with gaps between them to allow the water to flow out at low tide. The gaps were then closed between high tides and that sequence was repeated, layer by layer, to form a permanent cofferdam. In time, the top of the dam was above high water level and so could be pumped out and filled with concrete.

The Beachley pier differed from the one at Aust in that there was no convenient outcrop of hard rock available at this location, some 600 ft (200 m) offshore. The river bed level at this point is close to average low water level and so it was possible to gain access to the site at low tide.  New boreholes indicated that the river bed in this location consists of about 30 ft (10 m) of Keuper marl, before hard limestone would be reached. The Keuper marl in this location has a tendency to soften when exposed and so it was decided that the foundations for the tower should be taken down to a depth of 33 ft (10 m) below the top of the marl. Two circular concrete shafts would be provided to this depth, each 60 ft (18 m) diameter. The shafts were 78 ft (24 m) apart, centre to centre, to accommodate the twin legs of the Beachley tower. The concrete shafts would be built up to river bed level and pier protection elements would be added later across the tops of the two shafts. A complex series of operations was required to bring the plans for this foundation to fruition.

Two separate circular sheet-piled cofferdams were first constructed in the required locations for the circular concrete shafts. Unfortunately, the Keuper Marl proved to be too hard for the sheet piles to be driven very far but the cofferdams proved to be invaluable in allowing work to continue within them at all states of the tide. The sheet piles were bolted to a concrete anchor ring which was cast on the surface of the marl and anchored down into it by dowel bars. Subsequent excavation stages within the cofferdams were lined and supported by prefabricated concrete circular tunnel segments, bolted together. 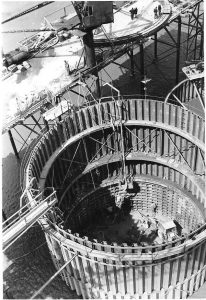 Closer view into the south caisson for the West Pier construction

As the excavation continued, the cavities between the segments and the rough walls of the shaft were grouted with neat cement. However, the limestone bands, on which it was intended that the circular foundations would rest, proved to be too thin and broken to provide a satisfactory bearing for the pier. The excavation continued until a non-conformity was reached, exposing the top of a steeply inclined, strongly consolidated, strata of hard carboniferous mudstones which were deemed to afford adequate bearing for the pier in conjunction with the frictional side support offered by the walls of the shafts grouted into the marls.

When completed, the excavation was filled with concrete and the two parts of the cutwater pier were built inside the cofferdams up to high water level. The cofferdams were then removed and the central portions and pointed ends of the pier were built as a tidal operation.

One of the final operations of Contract 1 pier construction was to cast pre-fabricated steel tower base units into the tops of the main piers. These had machined top surfaces ready to receive the steelwork of the bridge towers. In setting these to level an allowance had to be made for the curvature of the Earth over the c.1 km main span distance; this amounted to about 3/8th of an inch (c.1 cm) apparent difference in level.

The cable anchorages at both Aust and Beachley are essentially enormous blocks of concrete. They are keyed into the rock to resist the horizontal pull of the cables and their dead weight prevents them from overturning. The Aust anchorage is located 500 feet (150 m) from the foot of the Aust Cliff and was founded on rock exposed at low water. The top of the completed anchorage is at the level of the roadway. Besides anchoring the main suspension cables, the constructions at both Aust and Beachley were used as the foundations for the two main abutments of the Severn Bridge deck.

Externally each anchorage appears to be a solid block of concrete. In fact both are to some extent hollow with a central void between the two outer chambers into which the main cables are anchored. The anchorage at Aust only needed to be keyed by about 3 meters into the limestone bedrock exposed at low tide. That at Beachley had to be constructed down through the sediments of the peninsula. The initial excavation was by open-cut in a pit with battered sides about 10 meters deep over the whole plan area of the anchorage. Two parallel trenches then continued the excavation downward for another 20 meters or so to the underlying solid limestone into which a series of steps were keyed. As the excavation was performed top-down the higher levels of looser sediments needed to be supported by the arched concrete cast in-situ walings each about 2 meters deep. These were propped at the third points with pre-cast beams spanning across the trenches. The final depths of the excavation were in good rock which stood without support. Once the bottom had been prepared the trenches were filled with mass concrete with an open matrix of reinforcing bars. See image below. 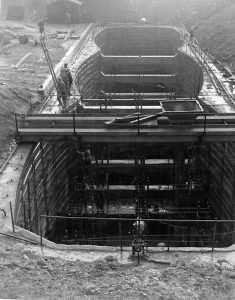