The contract for the provision and erection of the whole steel superstructure, including the towers, was awarded to a consortium, Associated Bridge Builders Ltd (ABB), on the 11th May 1962.

The novel design for the towers, by Freeman Fox and Partners, was based on the fabrication of many lightweight stiffened steel panels up to 60 feet (18 m) long, and varying in width up to about 12 feet (3.7 m), these sizes being the maximum that could be transported by rail. These relatively thin panels were stiffened longitudinally and transversely by rolled section stiffeners, welded to the inside face of the tower panels. This stiffening can be seen in the photograph below, as a new side panel is being fixed on the previously completed section of the tower.

The towers were fabricated by Arrols at their workshops in Glasgow.  Both were fully trial-assembled, lying on their sides in the workshop, before being transported by rail to Chepstow as individual panels. All fabrication, welding and protective treatment took place in workshop conditions. 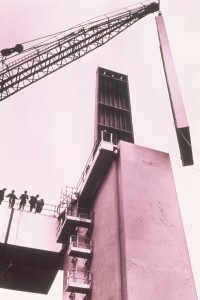 The Consortium’s first job on site was to erect the two steel towers 400 feet (125 m) high from the completed piers. The thickness in the four outer stiffened plates in the panels that formed the towers, reduces from 1 in (25 mm) at the bottom to 9/16 in (14 mm) at the top. This novel form of tower construction resulted in a significant reduction in steel weight in the towers themselves, compared to the previous traditional multi-cell construction used on previous large suspension bridges.

The heaviest sections at the bottoms of the towers, 55 feet 6 in (17 m) in height, were placed in position by derricks erected on the temporary staging at Aust and Beachley. They were fixed to the steel bases which had been cast into the concrete of the pier tops and were held down by pre-stressing strands. A specially designed climbing derrick crane was used to place the remaining sections of both legs. The four panels, making up each lift of the tower legs, were bolted together, internally, by vertical rows of bolts.

Horizontal diaphragms were fitted across the interior of each tower leg, at vertical intervals of 14 feet (4.2 m). Four 2 ins (50 mm) dia. screwed rods, one at each corner, were used to bolt the leg sections together as they grew free-standing. Three horizontal portals were built between each inward-looking face of the towers, as they grew, one just below the intended deck level, one at the tower top, and one between these two. The final lifts for the climbing derricks involved hoisting up the pre-fabricated, all-welded, steel cable saddles, weighing 25 tons each, which had to be set in position on the tower tops. They were the heaviest units lifted by the cranes.

Following the construction of the main cables and before erection of the deck commenced, the top of each tower was pulled back from the main span by some 2 feet 6 in (750 mm). To achieve this, a separate single cable was stretched from the top of each tower leg to the nearer anchorage. Each of these cables was then pulled downwards from its mid-point by a separate cable secured to the foot of the tower leg. As the deck units were being lifted and fixed in position, starting in the middle of the main span, the towers were progressively released until, at a maximum, they would be leaning some 15 inches (375 mm) into the main span. Then, as the side spans were constructed, each tower would return to the vertical position as the deck construction was completed and the main cable carried the full dead weight of the suspended structure.