Before work commenced on the permanent main cables, a catwalk together with a system of high level ropeways, had to be put in place along the line of each main cable, carrying free-wheeling groved metal wheels capable of moving from anchorage to anchorage, via the tower tops. 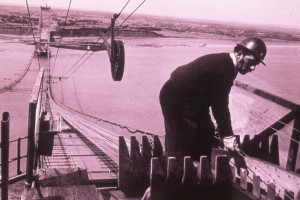 A barge was used to carry the first catwalk cables across the river. A wire mesh floor and sides formed the catwalk from which the cable spinning would be carried out. The apparatus for the “spinning” process was brought down from the Forth Bridge, where it had completed the main cables for that structure during the previous two years. At Severn, it was decided to take only two bights of wire on each wheel, instead of the four used at the Forth where there had been some problems, in control, during construction of the cable. 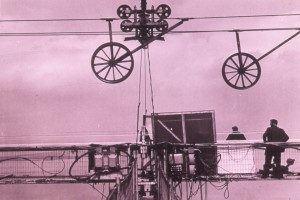 Spinning wheels passing each other at mid-span

The construction of each cable, involved hauling 8322 galvanised wires of 5 mm nominal diameter, two at a time across the river from anchorage to anchorage. The wires were then made up into 19 strands, of 438 wires each, and the strands were arranged in the form of a vertical hexagon, being held in this shape over the saddle at the top of each tower. The ultimate tensile strength of each wire was specified to be 110/120 tons per sq in (about 1550 N/mm²). 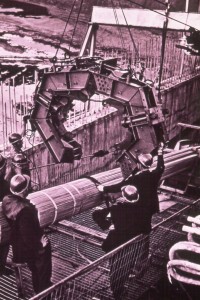 The completed cable was finally compressed into a circular shape and bound tightly with a single layer of wire applied under controlled tension. When the spinning was complete, cast-steel cable clamps were positioned along the cables at the predetermined hanger suspension points about 60 feet (18 m) apart and carefully bolted up to a specified minimum clamping force.