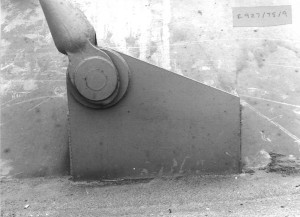 The design of the hangers, which suspend the deck from the cable, was based on a good deal of research and development. The aim was to dampen vibration through hysteresis and the novel inclined pattern into which they were hung was intended to add to the dampening effect. Each hanger was of a predetermined length and 2 ins (50 mm) in diameter. The construction was of 178 individual 0.133 in zinc coated wires made into a long spiral with each successive layer being wound in the opposite direction to its predecessor. This countered any likely untwisting effect that would have occurred if they were all wound in the same direction. The hangers were attached, at 60 feet intervals, to clamps around the main cable by clevis pins and also similarly attached to the deck. This made it possible to produce the hangers to predetermined lengths and socket them before delivery to site. While they might have looked slender, each had a specified breaking load of 225 tons against a working load that was not expected to be greater than 100 tons. 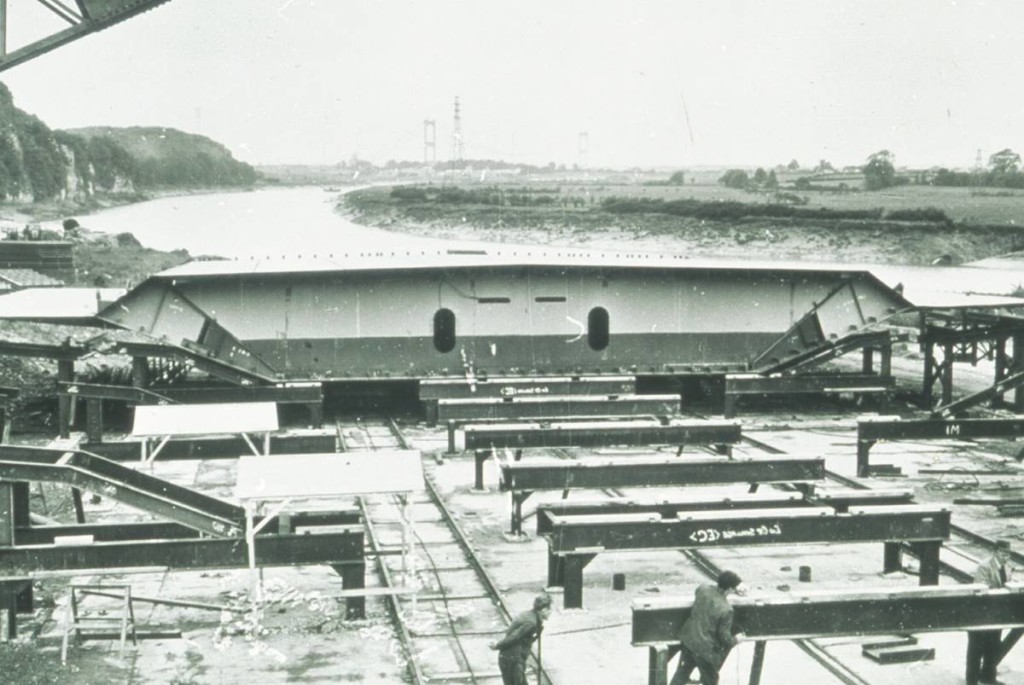 Deck boxes being assembled and matched on slipway

Meanwhile sections of the bridge deck were being formed at the slip-ways on the Wye at Chepstow.  They were each match-cast against their predecessor, ensuring that adjacent sections accurately fitted together in the erection sequence. The deck sections are 60 feet (18 m) long and about 105 feet (35 m) wide, weighing about 120 tons.  Following application of a protective coating, the sections were launched onto the river and moored, until being towed to the bridge site when required for erection. 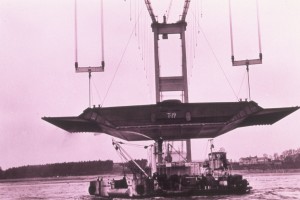 They were then positioned using a special pusher barge and accurately located by multi-pulley block and tackle operated by winches from the tower tops. Small winches controlled swinging and rocking as the first section was lifted into place in the middle of the main span. With the deck unit lifted to the correct height, the hangers were attached and the weight of the unit was transferred, via the hangers, to the main cable. 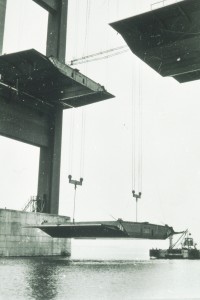 Erection of boxes adjecent to the towers

Further units were lifted, first to one side of the centre and then the other, to keep the overall weight balanced across the centre span.  Each new unit was fixed to its predecessor, initially, using temporary clamps on the top flange. This was because a considerable number of units had to be erected to each side of the centre, before the shape of the hanging deck began to resemble its final profile. At that stage, the erected units could be permanently welded together. Erection continued, keeping the sides in balance throughout the main span. The erection of the side spans then commenced, from the anchorages to the towers, keeping the Aust and Beachley side spans in balance. The final two units erected, each side, were those adjacent to the towers in the side spans.

These operations were carried out without significant problems or delay. This was no mean feat given the unpredictable forces of nature and the strength of the tidal flows. Once the 88 sections of deck were in position and welded together, only minor additions such as the deck furniture remained, apart from the roadway expansion joints either side of the towers and the surfacing of the deck.

The aim was to minimise the deck dead load. Therefore concrete surfacing, as was common in America, was not used. Experiments were carried out by the Road Research Laboratory followed by site trials at a number of locations around the United Kingdom. It was discovered that a 1 1/2 inch (40 mm) layer of hand-laid, stone-filled, mastic asphalt would prove satisfactory. This was laid on the zinc-sprayed top surface of the boxes, coated with a thin adhesive, over which a thin layer of rubberised bitumen had been spread to seal and prevent corrosion of the underlying steel.