The growing clamour for a road bridge across the Severn Estuary

The successful completion of the Severn Railway Tunnel in July 1886 seemed, at the time, to be a lasting solution to the age old problem of carrying men and material across the lower Severn. However, within a few years, the advent of the internal combustion engine raised entirely new issues and fresh demands. Within a few decades, a powerful and vociferous lobby had arisen, demanding radical action from the government to create a network of inter-urban roads suitable for the era of the motor car.  This network would, in time, include a new road bridge over the Severn Estuary.

During the early thirties, the County Councils were responsible for major roads. In 1934, Gloucestershire and Monmouthshire Councils jointly introduced a Parliamentary Bill, seeking powers to build a structure across the Severn at the English Stones. This proposal had a suspension bridge over the Shoots channel, together with stretches of viaduct to either side, very similar to the Second Severn Crossing that was eventually built in the 1990’s. However, the Great Western Railway objected to the proposal, ostensibly on the grounds of potential damage to the Severn Tunnel, and the Bill was rejected by Parliament in 1936.

This bridge, had it been built in the thirties, would have stimulated the regional economy over the following 30 years, so that a second bridge would probably then have been needed rather earlier than the 1990s when the Second Crossing became available.  It is interesting to speculate where that second bridge would have been built and what form it might have taken.  A new crossing between Aust and Beachley would, in those circumstances, involve considerable extra distance and, on that count, would have been heavily penalised in a modern economic analysis.  The structural form of the second bridge would have depended on the period in which it was designed, bearing in mind that cable stayed structures require considerable computing power for their design and analysis.  The existing Shoots Bridge on the Second Crossing was ‘State of the Art’ when being built in the early 1990s.

It is also interesting to speculate on whether the magnificent Severn suspension Bridge would ever have been built if the technology for the economic assessment of road improvement schemes had become available earlier. The bridge had passed through its design and construction phases in the 1950s and 1960s, before the economic assessment technology had been sufficiently developed. The alternative to the Aust-Beachley route would, presumably, have been a scheme on a similar route to that of the Second Crossing, across the English Stones, but with a suspension bridge over the navigation channel (which, in principle, is the scheme rejected by parliament in 1936).

Both of these speculations have arisen because the Aust-Beachley route is more than a mile longer than the route over the English Stones. When the two routes are subjected to economic analyses for a comparison between them, the only significant change from the original analyses (based on costs of construction alone) is that, in the case of the Aust-Beachley route, an additional cost is imposed on the UK national economy, for traffic running over the extra length of road. And for motorways crossing terrain of this type, it has been found that the cost of traffic running over a stretch of motorway, is generally about four times greater than the cost of building that stretch, a sum that would have been approaching seven figures, even in the 1960s. Would that figure have been sufficient to persuade the Transport Department to build the first road bridge at the English Stones? It is now impossible to say!

Whilst in the mid-1930s, the above mentioned Parliamentary Bill from the two counties was being debated in Parliament, the Ministry of Transport was taking the decisive step, through the Trunk Roads Act of 1936, of becoming directly responsible for a specific network roads of national importance, thereafter known as trunk roads, so ending many decades during which the County Councils had been the dominant force in managing and developing the highway network. However, before any significant progress could be made under the new arrangements, the Second World War intervened.

The completion of the railway tunnel in 1886 had brought an abrupt end to the ferry service that had been the crucial element of the Bristol and South West Union Railway system for more than twenty years (see “History of Estuary Crossings” section). The residual demand for such a service would have been absolutely minimal but, in the decades that followed, the first cars started to appear on British roads and, as the trickle developed into a flow, it was only a matter of time before an enterprising individual established a car ferry. 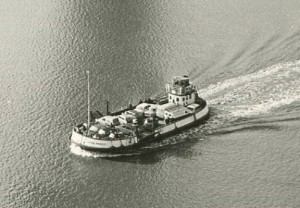 The Severn Princess with a full load approaching Beachley Slipway

The Old Passage Severn Ferry opened in 1926. The crossing was not a very pleasant experience for many, especially in the early years, and the 60 mile (96 km) journey via Gloucester was still preferred by the faint-hearted. The reputation of the Old Passage between Aust and Beachley, with the second highest tidal range in the world, its 10 knot tides, its rip tides and its cross winds did not help. The ferry boats were relatively small, with flat bottoms and no keels, so that they could operate effectively at low tide. But they worked to a time table. Those involved claimed that the ferry service had carried about half a million passengers in its final year. 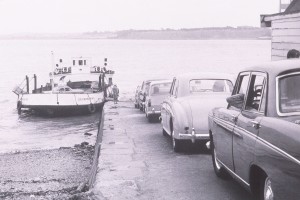 Like its predecessor, this service was brought to an abrupt end when the Severn Bridge opened in 1966. There were three ships in use at the time, the Severn King, the Severn Queen and the Severn Princess and they all came forward to salute their nemesis before disappearing from the scene. Most of the crew found immediate employment connected with the bridge. The two older ships had come to the end of their useful lives but the Severn Princess was taken to Ireland, only to be rediscovered in a poor state some 33 years later. It was patched up and towed back to the Severn, to be restored by the Severn Princess Restoration Group in Chepstow.

For further details of the earlier background, see the “Previous attempts to cross the Estuary” section of the website.