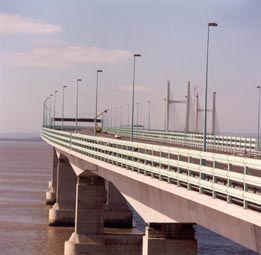 The second Severn Crossing was the first major bridge in the world to have its traffic protected from high winds by wind shielding.  It is designed so that coping with the wind on the Crossing, high above the estuary, should be no more difficult than on the approach roads.

Simulation studies and wind tunnel testing were used to find the best solutions, both for the traffic and for the aerodynamics of the bridge.  The shielding was also tested to ensure that snow and ice would not block the gaps between the horizontal rails, since this could cause the system to be blown down. 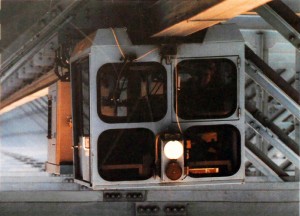 When a bridge is structurally complete, and you can walk the length of the deck, it might appear to be nearly finished.  In reality there are many operations that still have to be carried out before it can be opened.  The finishing works on this scheme included waterproofing the deck, laying the carriageway surfacing, erecting signs, installing the lighting, providing carriageway markings (such as white lines), installing electrical, water and fire mains and safety fences, and integrating the motorway communications system with the approach roads.  And, uniquely for this scheme: the installation of wind shielding and the provision of a maintenance train, suspended by rail under the deck.

Creating the link was not just about building the crossing

The economic benefits, which make the scheme worthwhile, come from reduced journey lengths, leading to substantial savings of time, fuel and other running costs, as well as from greater reliability. The new motorway approaches connect the crossing to the national network and were therefore equally important in creating a successful scheme.  Connections to both the M4 and M5 were provided.  In England, the new section of M4, together with the M49 which connects to M5, total 14 km in length.  In Wales, the new M4 is 5 km long, while a further 2 km of the existing M4 was widened. The toll plaza introduced with the Second Crossing was located roughly midway along the Welsh approach road, with tolls collected from westbound traffic only.

The approach roads cross the reclaimed alluvial floodplain of the River Severn and this posed very significant engineering problems.  The ground is soft and wet and it moves… a lot!  Settlement of up to 1.8 metres was expected beneath some of the highest embankments.  What was done?

Extensive vertical drainage systems were installed, deep into the mud, to allow the water that was being squeezed out to escape.  Additional material was placed on the embankments to speed up the rate of settlement.  The embankments were monitored to check movements and work on the foundations for the bridges over the motorway was delayed until the ground had been stabilised.

On the Welsh side, the expected settlement of the existing peat was so great that it was dug out and replaced with crushed rock.  A special reinforced embankment was built on this rock to minimise the area required. Where the new motorways cross the artificially drained floodplains of the estuary, the flora and fauna that had established itself in this special environment required particular care and attention.  Water running off the road had to be kept separate from the natural drainage.

29 new bridges were required to carry the local roads and new links over and under the motorways,.  Other bridges were extended, while two existing bridges over live motorways were demolished.

Most of the bridges employ steel beams to support thin concrete decks, as these could be lifted straight onto the piled supports.  Eight bridges over the busy M4 were constructed with special glass reinforced polymer (GRP) enclosures around the beams.  These enclosures were built with sufficient space inside to enable inspection and maintenance to be carried out from within, thus avoiding the need for cones on the motorway.  The enclosures also protect the steel beams from aggressive elements in the atmosphere, reducing corrosion and the subsequent need for maintenance.

The enclosure for the bridge over the railway at Rogiet was fixed to the beams before they were lifted into place.  This allowed construction of the deck to proceed, without delaying the trains passing underneath.

People made it happen

The complimentary skills of the British/French joint-venture produced a team that was able to cope with many challenges and deliver the new crossing on time.

Ensuring safety on a large scheme in an aggressive environment is never easy and, in many ways, that presented the greatest challenge – nothing is more precious than life.  The excellent news is that there were few accidents during construction, with no fatalities.

Other facts and figures

At the peak, 1000 men and women were employed on the project.  Work continued 24 hours a day, seven days a week.

Workers consumed half a million eggs, half a million rashers of bacon, over 10,000 loaves, 12,000 catering size tins of baked beans, and around 19,000 lbs of chips.  They also downed 150,000 mugs of tea and coffee, and 150,000 pints of milk.  Laid end to end, the half a million sausages served in the site canteens would stretch from Cardiff to Birmingham

The project was built to time, and to budget, from inception to completion.  It was formally opened by His Royal Highness the Prince of Wales on 5 June 1996.

The significance and excellence of the project led to it receiving the British Construction Industry’s Supreme Award for 1996.

It was necessary to increase the initial concession period to reflect the impact of the legal judgement requiring VAT to be recover within the toll payments but at the end of the revised concession period, the 8th January 2018, the crossings were handed back to the UK government debt free. Toll charges were then reduced to reflect the removal of the need to charge VAT.

The Second Bridge was officially renamed The Prince of Wales Bridge on 2nd July 2018 by The Prince of Wales at a ceremony in Newport. Toll charges were removed totally from both crossings on 17th December 2018 and subsequent works removed the toll booths and associated infrastructure. T