An improved ferry service – after a long gestation

In 1844, Brunel started to consider the possibility of reviving the direct route across the Severn, via the New Passage, by bringing together the convenience of a railway and the flexibility of a steam ferry.  The idea had much to commend it but for various reasons, it did not get underway for another 14 years.   Brunel himself was involved from time to time, although he was also working on many other projects during this period.

The first positive proposal along these lines, known as the Bristol and South Wales Junction Railway, was approved by Parliament in 1846.  It comprised a branch line from Bristol to the pier at New Passage, a further short length of track on the opposite side of the Estuary to connect from the ferry pier at Portskewett to the SWR, and a ferryboat to run between the two piers.  The timber piers, designed by Brunel, were to be approximately 500 ft (155 m) long to accommodate the full length of the train and to reach out into the deeper water.  Financial problems led to the abandonment of the scheme in 1853.

Another project based on a similar principle and entitled the Bristol, Wales and Southampton Railway was brought forward in 1854.  A “steam bridge” across the river was proposed, at the same point, with the railway carriages being hauled onto the ferry boat, thus allowing people to stay in their seats.  This project also failed from a lack of investment. 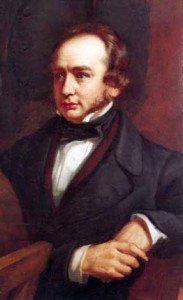 Three years earlier, in 1854, when construction of the bridge over the River Tamar at Saltash was well underway, the new Duke of Beaufort had consulted Brunel about the possibility of bridging the Severn Estuary at Old Passage.  On 30 May 1854, Brunel replied through the Duke’s agent, in the following terms;

“I should be very glad, if the Duke thinks seriously that it would benefit his interests, to look seriously into the question and give the best advice I can.  And if I should be able to suggest a feasible plan and there should be friendly people ready to make it, I shall have the satisfaction of bridging the Severn, as well as the Tamar.”

Brunel is on record as saying that he believed there would be a bridge or a tunnel across the estuary within fifty years.  Although the Duke did not take the matter further, Brunel obviously kept the exchange in mind because, in April 1857, probably while attending the public inquiry into the B & S W U R, he made a sketch of a design with obvious similarities to that of the Tamar Bridge.  Under the drawing, Brunel had written ” Severn Bridge.  Q: is 1,100 ft practical”.

Brunel’s sketch for a bridge across the Severn Estuary

Development of the Bristol and South Wales Union Railway

Finally, a scheme was brought forward by the new Bristol & South Wales Union Railway Company (B & S W U R), this time with strong Welsh backing and with the chairman of the SWR on board.  A public enquiry was ordered by the Admiralty and it opened in the New Passage Hotel on 25 March 1857.  Opposition was raised by the City of Gloucester and the Gloucester & Berkeley Canal Company, as well as owners of small craft and the steam packet Wye, that ran between Chepstow and Bristol.  Those who opposed the scheme had the mistaken impression that a chain ferry would be used.  Brunel, who had become engineer for the project in 1855, explained that this was not the intention; the project would be based on a train ferry and confined to passenger and light goods only.  An Act of Parliament for the B & S W U R was obtained in July 1857. 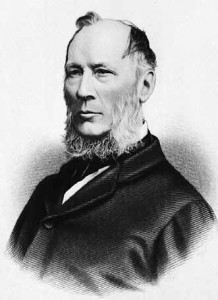 In September 1858, a contract for the 11½ miles (18 km) long single line railway from Bristol to the estuary was awarded to Rowland Brotherhood, with Charles Richardson as resident engineer, working under Brunel.  From the junction with the existing railway, ½ mile (1 km) east of Temple Meads Station, the line would include five local stations.  The piers leading into the river were the most innovative items, incorporating floating pontoons at the ends of the timber piers on to which the trains would run, with stairs and lifts down to the pontoons.  The piers extended far enough out to provide sufficient water for the steam ferry boat to come alongside at any state of the tide.  The pontoons floated with the tide and were therefore at the same level as the boat when it came alongside.  Sadly, Brunel died in 1859.

The full system from Bristol to New Passage, across the ferry, then on to the link to the SWR, for Cardiff, was achieved by November 1863, with the formal opening taking place in January 1864.  Initially, there were five trains a day, each way, and a single ferry, called “Relief”.  The route became so popular that other vessels were used from time to time to provide additional capacity.  Eventually, a second ferry was ordered from the Glasgow shipyard and named “Christopher Thomas” after the chairman of the company. This system now forgotten, was a marked improvement on anything that had been used previously and with the prospect of a tunnel still only an aspiration should be remembered as a major step forward. 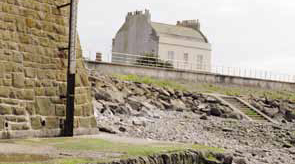 Present day photograph of what was the New Passage Hotel, from the foreshore

Sketch of the Ferry Pier at Portskewett

Remains of the Portskewett Pier, with the Second Severn Crossing in the background 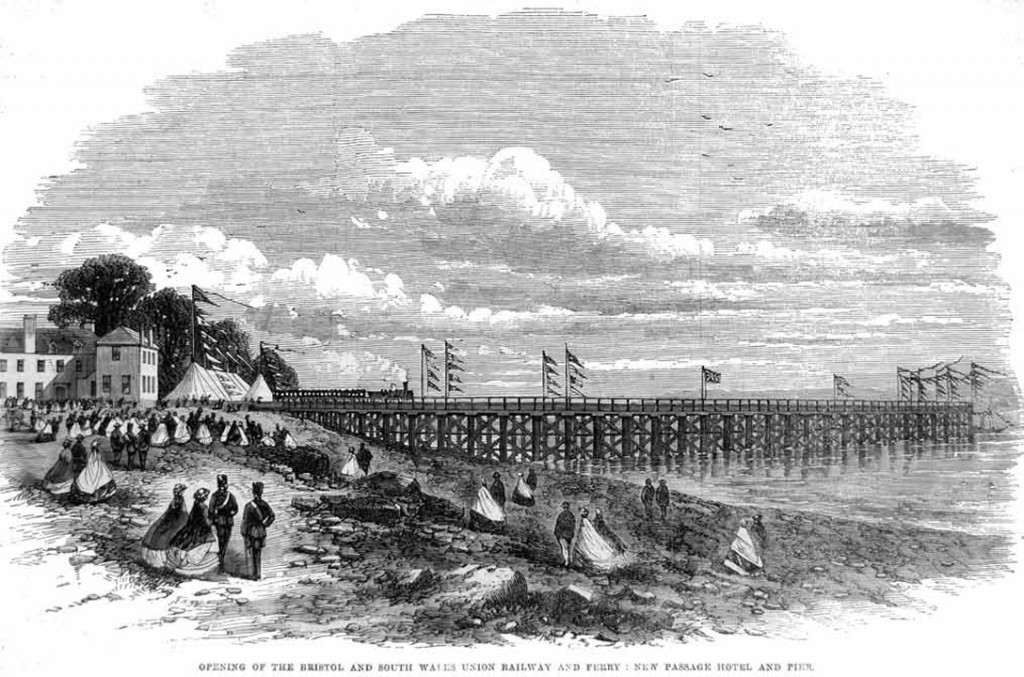 New Passage Hotel and Ferry Pier,
on the opening of the Bristol and South Wales Union Railway in 1864