The coming of railways encouraged engineers to explore other ways of crossing the estuary, especially for journeys between Bristol and the important and growing industrial areas of South Wales.  The coastal section of the South Wales Railway (SWR) had been completed as far west as Haverfordwest by 1854 and it soon began to displace shipping as the chosen method of transporting goods and people from one South Wales coastal town to another.  But the problem of negotiating the ferry at Old Passage remained.  Despite the improvements brought about by Telford, the ferry crossing was still treacherous in bad weather.  On a good day, the time taken to travel between Bristol and Cardiff, by coach and ferry, would be about seven hours.

The Post Office had considered installing a chain ferry during 1836.  James Meadows Rendel surveyed both the Old and New Passages but reported that tidal currents were too strong for his system which employed a steam engine on the ferryboat to pull, or warp, itself along a submerged chain.

By 1852, the SWR was connected by Brunel’s Chepstow railway bridge up the western side of the estuary to Gloucester.  This facility, together with the line between Gloucester and Bristol, provided a more attractive journey between South Wales and Bristol than was available using a coach and ferry, via the Old Passage route.  Accordingly, patronage of the Old Passage ferry declined rapidly and, by 1855, the use of steamboats could no longer be justified.  Attempts were made to keep the ferry open, using sailing boats, but eventually the passage closed.

Not enamoured with the circuitous route through Gloucester, the railway companies started to look into the possibility of crossing the Severn somewhere between Gloucester and Bristol.  This would provide a shorter route between South Wales and Bristol and it would please the colliery proprietors in the Forest of Dean who were seeking a less costly route for transporting their coal to English markets.  Also, the Great Western Railway Company (GWR) had concerns about the steep gradients in the Stroud Valley, between Gloucester and Swindon.

Early proposals for bridges in the vicinity of the ancient ferries included an ambitious 20-arch railway viaduct by Charles Blacker Vignoles in 1834.  He, like Brunel, had considered the possibility of tunnelling under the Severn.

Thomas Fulljames, Chief Engineer to the Bristol and Liverpool Junction Railway Company, proposed a more practical scheme, published in 1845. He suggested two possible designs for what he described as the Aust Bridge, in the vicinity of the Old Passage, just a few hundred yards below the line of the present crossing. It took advantage of several rocky outcrops that were exposed at most low tides 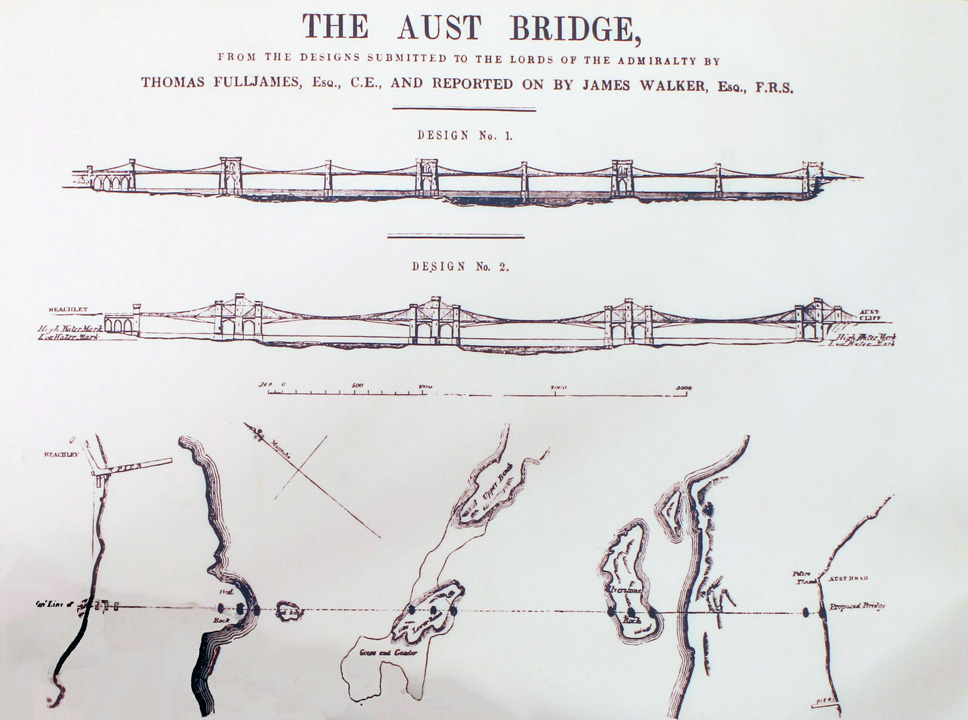 Two designs for a bridge at Old Passage by Thomas Fulljames

James Walker FRS was commissioned by the Admiralty to report on the proposals.  Fulljames argued that his first design “could be achieved with perfect safety to navigation”.  Walker disagreed, saying it would be objectionable on account of a pier, which “would be directly in the middle of the navigable channel”.  Navigation was a most important consideration in 1845 and shipping trade through the line of the Old Passage exceeded 600,000 tons per year with the largest ships drawing 19 feet (6 m) of water.  Mr Walker found no fault with the second design, but the Aust Bridge was never built. James Williams, first class pilot for 13 years seems to have had the last words – “it will not do at all”

In 1845, S B Rogers of Monmouthshire proposed a toll-free road crossing at the English Stones. It consisting of 21 arches of 350 ft (about 100 m) span and which would be at least 120 ft (about 40 m) above high water mark. It was to have “shops, bazaars and a lighthouse”. However this scheme was not well received by entrepreneurs or navigation interests. 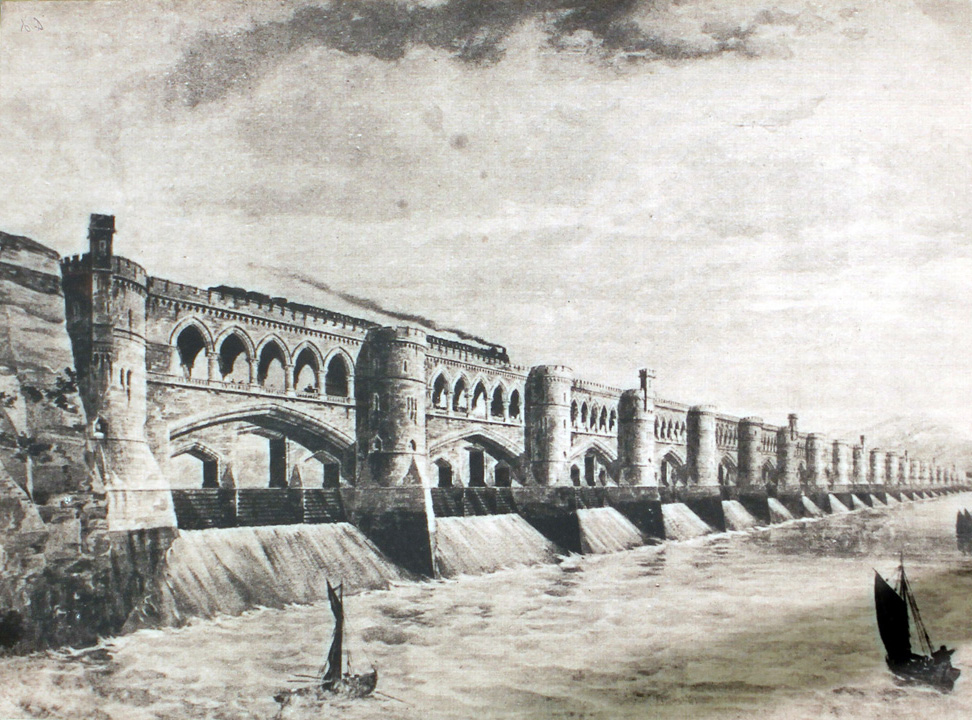 Sketch of railway viaduct, proposed by S.B.Rogers in 1834

Other early proposals for a railway crossing on the lower Estuary were concentrated on the short stretch between Sharpness and the Horseshoe Bend at Arlingham. The very first was in 1810 when the Bullo Pill Railway Co. started to tunnel under the Severn, south of Newnham, primarily for its own benefit. The company had acquired the rights of the Newham Ferry and began to construct a road tunnel that would have enabled adapted tramroad wagons to gain access to the eastern side. However, a major influx of the river brought work to a halt and it was never resumed.

On behalf of the SWR, Brunel brought forward a proposal for a timber viaduct that would cross the river from Hock Crib to Framilode on the Arlingham Bend, about 5 miles (8 km) above Sharpness. In his report, James Walker described the proposal as being “at about the very worst place on the river for navigation” and the scheme was rejected by Parliament in June 1845.

Later, in 1865, a scheme by Sir John Fowler was rejected as an ‘impediment to navigation’. Like several other rejected proposals in this area, it would have been located above the entrance to the Sharpness to Gloucester Canal. There is, however, an interesting footnote to this tale. Sir John continued to develop designs for a Severn Crossing, with spans of up to 1,000 ft (310 m) and based on the use of steel, until, in 1872, the GWR obtained parliamentary powers authorising construction of a tunnel under the estuary.  At that point, Sir John took his plans up to Scotland where, assisted by Sir Benjamin Baker, he developed them further until the design emerged for what was to become the world famous cantilever bridge that now spans the estuary of the Forth.

Eventually, in 1871, engineers George William Keeling and George Wells Owen, on behalf of the SWR, put forward a scheme for a railway bridge, to be located just above Sharpness. Parliament gave approval to the scheme in 1872. The design, for what became known as the Severn Railway Bridge, was for a conventional single line viaduct 4162 ft. long, comprising twenty-one spans supported on huge cast iron cylinders. The bridge was to be situated half a mile above the entrance to Sharpness docks and the canal to Gloucester. 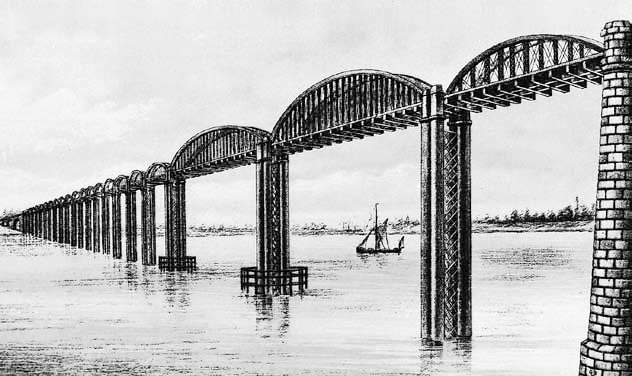 It is rather surprising that investors were prepared to support this project at the time. Work did not begin until 1875 and, by that time, construction of the railway tunnel under the Estuary, on the direct route between South Wales and Bristol, had already been underway for two years. However, part of the motivation behind this investment was undoubtedly to support mining interests in the Forest of Dean and many of the investors were sceptical about the tunnel ever being completed.

The fate of the many earlier attempts to obtain authority to construct a rail link across the lower Severn Estuary indicated a general reluctance on the part of Government to approve a scheme if it were deemed to be a hazard to navigation. All the previous attempts, mentioned above, were abandoned, at least in part, because they failed to surmount that hurdle. It is therefore surprising and – with hindsight – rather disturbing, that construction of the Severn Railway Bridge should have been allowed to proceed.

Disaster struck on the night of 15 October 1960, when two self-propelled fuel barges missed the entrance of the Gloucester to Sharpness Canal. In the dense fog, both skippers attempted to get back to the canal entrance but the two vessels collided and became locked together. Minutes later, with a combined weight of 858 tons, they struck one of the piers of the railway bridge. The debris from the cast-iron pier of the bridge and the two adjacent spans crashed down onto the barges, igniting the fuel.  Five of the eight crewmen on board the barges lost their lives. The bridge was not replaced. Apparently, it had been hit many times previously but the cost of substantial protection around the bridge piers had always been considered prohibitive.