Since prehistoric times, the Severn Estuary had been an obstacle for those who wished to cross it. The Severn Railway Tunnel was completed in 1886 and regular services commenced in December of that year.  It was the first means of crossing the river that was not affected by the weather or the tides, and it was assumed to be a lasting solution to the problem of moving between Southern England and South Wales. Prior to that, coastal shipping had been the first choice for both goods and individuals. However,  it was only a decade after the railway tunnel opened, that the first motor-cars appeared on the nation’s roads and, just three decades after that, their numbers had increased to such an extent that they were causing congestion in many areas.  In time, the River Severn ferries were unable to cope with all the vehicles that wanted to cross the Estuary.  A bridge across the lower Severn reaches was needed.

The bridge would need to be able to withstand nature in all its moods. The tidal range on this stretch is the second largest in the world, over 40 feet (14 m) – and the water flows at up to 8 knots during major tides. The large spring tides create the famous Severn Bore, a tidal wave which rushes from upstream of the crossing, as far as Gloucester, over thirty miles away, and can be 10 feet (3 metres) in height. High winds gust at over 100 mph.

How would such a bridge be built? How could all the difficulties be overcome? There were two locations along this stretch of river that seemed to stand out as probably being suitable for the construction of a new bridge.  Many centuries earlier, they emerged as the most popular points from which to attempt a crossing of this part of the river, in a coracle or other rudimentary vessel.  These locations are now known as passages and they have both been confirmed, by usage, as the most appropriate sites available for a crossing of the lower river.  The factors that worked in favour of these two locations in the past. could work for them again.  And, of course, all kinds of infrastructure would have been provided along these routes over the centuries , adding to their attraction as potential bridge sites.

Both the passages were extensively assessed and compared as competing options for the location of the proposed bridge, and there is no record of any other site being considered in depth. The two sites are only 5 km (3 m) apart, as explained in the history section, the oldest one is known as the New Passage. It lies to the south of Old Passage and it crosses the river where a small outcrop of hard limestone rock, known as the English Stones, is exposed during every low tide. The Old Passage, on the other hand, had the advantage of crossing the narrowest section of the river for many miles in either direction.  For further information about the two passages, and a sketch map, go back to the the first section of this website, which is entitled “Previous attempts to cross the Estuary”, and check out the first chapter on ”History of Estuary Crossings”.

By the early nineteen thirties, road traffic had become an issue

By this time, the country was starting to return to a normal life after nearly two decades of devastation caused by the First World War and followed, first, by the arrival of the ‘Spanish Flu’ Pandemic, and then by the Great Depression.  The government was starting to address the issues that had been put aside, so that the nation could concentrate on survival. The main roads connecting the towns and cities now needed urgent attention to enable the national economy to prosper from the enormous potential presented by the numbers of cars and commercial vehicles that were then using the nation’s roads. At that time, the county councils were still responsible for all the roads within their boundaries.

A powerful and vociferous lobby had arisen, demanding radical action from the Government to create a network of inter-urban roads, suitable for the era of the motorcar.  In the West Country, Gloucestershire County Council was being pressed to take steps to provide a bridge across the Severn.  The Council responded by appointing consultants, Mott, Hay and Anderson, to prepare plans to be put before Parliament for this purpose. And Monmouth County Council joined forces with Gloucestershire, for a joint endeavour to acquire a road crossing of the lower Severn.

Initially, the consultants had favoured a high level suspension bridge located on the line of the Old Passage Ferry between Aust and Beachley, with a main span of 3,000 ft (950 m) and a conventional truss deck,. However when they had collected the data needed from the site and had undertaken initial design calculations, the consultants reviewed the situation with the two County Councils, and the decision was taken to change the route of the crossing from the Old Passage to the New Passage, where the navigation channel shares the river bed with the English Stones.  The consultants recommended construction of a suspension bridge with a main span of just 900 ft (275 m) across the navigation channel, wholly within the river. To complete the actual crossing of the river, two lengths of viaduct would be provided, one on either side of the bridge, stretching from the outer face of each main cable anchorages to a viaduct abutment on dry land.  A sketch of this is shown below. 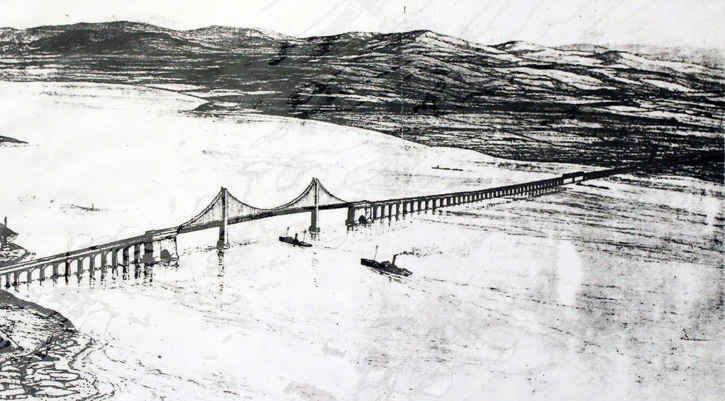 In 1934, the plans from the two County Councils were sent to the Government as an integral part of a Parliamentary Bill with a request that the Councils be given the powers necessary to build the bridge.  The Councils also requested that 75% of the cost of the works should be provided by the Ministry of Transport.  However, the Great Western Railway opposed the scheme in Parliament, because of the damage that it might cause to the Severn Railway Tunnel.

The problem was that the new road would have to pass over the top of the railway tunnel, out in the river, with a very small angle, horizontally, between the centre-lines of the two routes, at the point at which they would have to cross.  The GWR argued that the distance between the viaduct pier foundation, that would become the nearest one to the tunnel, horizontally, could not be a sufficient distance away from the tunnel, to avoid the risk of damaging it.  In 1936, the Councils’ Bill was rejected by a Select Committee of the House of Commons. This came as no surprise, given the strength of the railway case, but it was a blow to the Councils.  By that time, the national debate about the management of the main road system was coming to a head and so the two County Councils decided to take no further action on the lower estuary crossing, until those issues were resolved.

The government had been under pressure for some time to change the system for managing and improving important inter-urban roads.  It was widely recognised that County Councils could not be expected to bear the financial burden of developing a new national highway system.  At the same time, there was strong evidence, from other countries, of the benefits to be gained from the construction of high speed inter-regional roads, under central direction.  The Government decided to create a Trunk Road Network that would be administered, maintained and financed by Central Government.  This change came about in 1936, when the Trunk Roads Act was added to the Statute Book.  The defined network of trunk roads that accompanied this legislation, included a Severn Crossing and an improved A48 road along the South Wales coast.  However, preparations for the second world war intervened and a further 20 years passed before any construction work could be started anywhere on the new trunk road network.

Gloucester County Council started lobbying the Government again, as early as 1943, for steps to be taken to ensure that a bridge across the Estuary would not be delayed.  In 1945, the Ministry of Transport, now acting as the client, appointed Mott, Hay and Anderson to prepare a scheme for a crossing on the line of the Old Passage Ferry between Aust and Beachley.  The Ministry must have been satisfied, at that stage, that there would be no chance of finding an early solution to the issues that caused Parliament to reject the crossing at the English Stones in 1936.  However, engineering moves on, and 40 years later, an engineering solution acceptable to British Rail was found, thus enabling the Second Crossing to be built across the English Stones.

In 1946, a National Plan was published by the Ministry of Transport showing the first road crossing of the Severn on the Aust-Beachley-Newhouse line, together with a high-speed road link from the crossing at Beachley to the A48 at Tredegar Park, west of Newport.  On 22nd of July 1947, details of the scheme were fixed by a Statutory Order made in accordance with the Trunk Roads Act, 1936.. As well as the suspension bridge, the route would also require a bridge over the River Wye and 8 miles (13 km) of new trunk road.  Investment in this project would bring massive benefits. because without it, more than 50% of the traffic between southern England and South Wales would still need to make a detour of 60 miles by driving up to Gloucester and back down again, in order to cross the river Severn.

How would the work be paid for? The benefits from the project, in terms of time and travel cost savings, were so exceptionally high that the Government decided it would not be unreasonable to impose a toll on all vehicles using the bridge, to defray the cost of building it. The government would have to provide funds to pay for the construction, initially, and an act of Parliament would be required for the tolls to be collected, until the cost of the works had been recovered.

The efforts of the consultants, with all the investigations and studies that were undertaken, both before and after the second world war, fed into the design process to ensure that the new bridge, the culmination of aspirations that went back for more than 100 years, would be worthy of the history and the setting of the site. These aspirations yielded a structure that is world class, with a revolutionary design that has stood the test of time, despite having to be strengthened to cope with twice the weight of traffic for which it was originally designed. The story of how all this happened is given in the following chapters.